The restorative power of fire 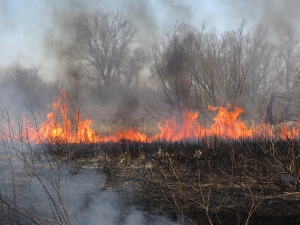 It seems counter-intuitive, doesn’t it? Using fire as a tool to improve the condition of natural areas.

Yet, through millenia of struggle between plants, animals, and the natural forces of wind, snow and fire, a system developed in this area where the trees that were best able to withstand the effects of fire came to dominate much of the landscape. And along with those trees came the plant, animal, bird & insect species that were most compatible with those trees.

Yes, I’m talking about our oaks.

Like sentinels, the bur oaks stretched their branches out across the prairie, catching the maximum amount of sunlight – growing broader than they were tall.

And the fires made that all possible.

McHenry County sits at the line between two ecoregional zones – the Grand Prairie and the Prairie-Forest Border. To the south, east and west of this area there once stretched a vast grassland where the buffalo roamed and fires once swept for miles and miles before hitting a natural barrier like a river.

To the north and west was once the prairie-forest border region where the prairie gave way to trees, but the trees did not form actual forests. Instead, the trees – often oaks – were widely dispersed, or found in clusters where they were sheltered from the prairie fires that came from the south and west. This is where the oak savannas were created, and where a unique system of insects and plants emerged that is now one of the most endangered natural communities on the plant.

In the absence of fire, today’s oaks are crowded out by fast-growing, shade tolerant species like maples, buckthorn and honeysuckle.

So as odd as it seems, we try to burn the woods when conditions permit, as it is the easiest way to keep them in a healthy condition that supports a greater diversity of plant & animal species!