Week 8 of CLIP was packed full of invasive work, collecting mushrooms, and working with some great people out in the field! 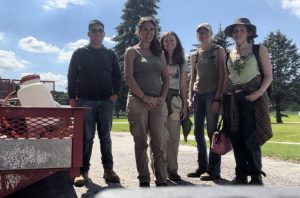 We kicked off Monday with Melissa Grycan, the Natural Heritage Biologist from the Illinois Department of Natural Resources and previous employee of TLC. Melissa drove us out to one of her sites called Harlem Hills out in Rockford. The site was a complete hidden gem – a 90-acre remnant prairie in the midst of trailer parks and busy roads. Our field trip consisted of asking Melissa questions about her job and the work environment at her government job. There are definite differences between working for a nonprofit versus a government job and Melissa offered us lots of advice and planted some perspective in each of our minds as to what we want our careers to look like.

At Harlem Hills, our hike consisted of touring the site and stopping to learn about new plants 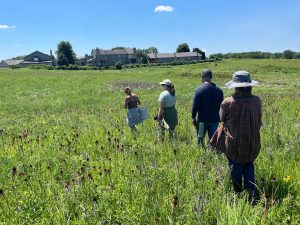 while simultaneously looking out for invasives to remove. Despite the massive acreage of the site, it is very well-kept and there was little work for us interns to do. When we did stop to do some invasive work, we pulled mullein, parsnip and sweet clover. When our hands got too full of plants, we’d toss them into a shady, wooded area to avoid regrowth of the invasives. We also collected seed heads of the parsnip as extra precaution. Toward the end of our day, we searched the prairie for a rare native thistle seed Melissa had set her heart on showing us. Isaac finally was able to find a couple of plants and we got the opportunity to collect seed from it. The best part of our morning at Harlem Hills was spotting a rare species of conservation concern in multiple spots at the site. It was a really beautiful plant and I’m glad we all got to see it. After collecting some plants for our personal journals, Melissa drove us back to Hennen Conservation Area and we thanked her for a fun day!

Tuesday brought a packed day of invasive work and even a fun fungus lesson! We’ve spent several days working out at Irish Oak Savanna and today’s goal was to finally complete our work at the site. We made some milestone herbicide for thistle and packed up the truck with everything we would need for the day to kill parsnip, sweet clover, thistle and garden valerian. We started off the day earlier than usual, around 7:00 a.m., to avoid the heat which helped everyone’s pace and work. We worked for a long time on two separate areas, Bree and I continuing where we had left off the previous week, and everyone else pulling parsnip on another side of the site. Once Bree and I completed the small patch, we headed over to the others to help pull parsnip and additionally some sweet clover. As we walked further down the site, we found the thistle that needed spraying so half of us got their backpacks to spray .2% Milestone on the thistle while the others collected seed heads of Nodding thistle. After I’d finished collecting seed heads, Kim asked me to mark on Collector the area we had worked on so we had evidence of invasive removal on our maps. We broke for lunch and then moved on to the next area of Irish Oak Savanna in which Kim, Isaac, and I sprayed for thistle while Casper and Bree pulled parsnip.

After about two hours of work and a nearly complete site, we packed up the truck and returned to Hennen, excited for next thing on the agenda: a workshop lesson on fungi with Lisa Haderlein, the executive director of TLC. One of her hobbies in the past several years has been making spore prints of different fungi and learning to identify them. We even got to make our own spore print of a mushroom found at Hennen by removing the cap from the stem and placing it under a glass over a sheet of paper. We waited for the next morning for the big reveal of our print. Everyone really enjoyed learning about different fungi and looking at the resources Lisa shared with us, so much so that I’m considering starting my own mushroom journal! It can be intimidating because of the many things to think about regarding mushrooms and fungi however with a little bit of practice, the world of fungi can be a fun one! 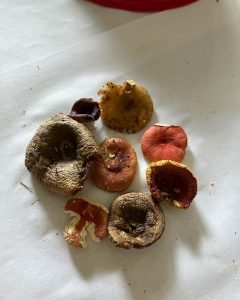 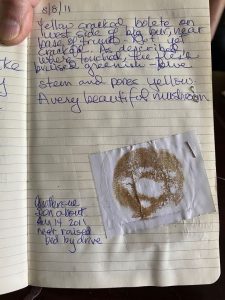 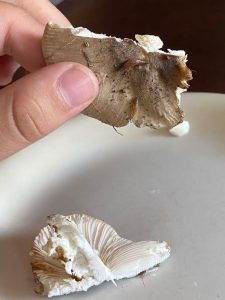 On Wednesday our work began at Hennen making a Garlon herbicide solution for the teasel found at the Clark easement, the first easement TLC ever acquired! It was cool getting to see the site and how close it was to Wolf Oak Woods, kind of connecting the dots as to how TLC got Wolf Oak in the first place. We split up into two teams: Kim, Isaac and I working on the teasel at Clark Easement while Bree and Casper stayed at Wolf Oak Woods to remove brushy invasives with the brush saw following up with a Garlon 4 treatment. While at the Clark easement, we met the owner of the property and got a lesson in the importance of clear communication and positive relationships after a surprising conversation with the land owner. Shortly after, we got to work on the huge teasel field, trying our best to fight against the wind. The wind, however, had a mind of its own and decided to work against us rather than with us and it was difficult to spray the plant well while safely avoiding the people around us. With the field being so big, we couldn’t finish spraying the whole easement and decided to finish up another day. 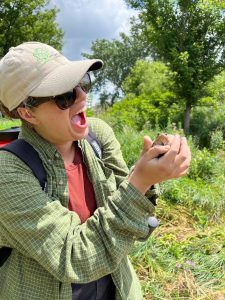 Then, we continued our invasive work at Powers Creek where our goal was to spray thistle. It was really hot outside and still windy so it was a little difficult to get the work done, but we managed well. At one point, the “Creek” part of Powers Creek became pretty evident to me after I misstepped and my foot fell into the creek! It wasn’t too bad besides a muddy shoe. One highlight of our time at Powers Creek was getting to hold a toad which Casper found beside the water and showed me. I had never held a toad before and finally getting to was really cool. After we finished spraying, Kim decided to surprise us with a treat and took us out for ice cream in Woodstock Square!

Thursday we were set to spray teasel and pull parsnip at Remington Grove, a subdivision easement in the McHenry and Johnsburg area. We worked in teams, Bree and I clipping flowering teasel heads and following with an herbicide treatment while Kim, Casper and Isaac pulled parsnip. Bree and I finished the teasel pretty quickly since there wasn’t much to work on by the roadside, so we went to scout the area in the back end of the easement in the woods for more teasel but found none. Our work was done shortly after our lookout so we returned to Hennen to find more work to do. Kim sent us out to find teasel in the back of Hennen but on our search, we discovered David had accidentally mislabeled a field of Reed Canary Grass as Teasel so we came back to the office and had lunch. While Kim attended an afternoon meeting, Megan Oropeza directed us to plant some plugs that were kindly donated to The Land Conservancy by Red Buffalo Nursery. We followed Megan’s map of Hennen for the plants and got to work. After making some rows and digging holes, we planted two of many trays and finished up our work for the day. 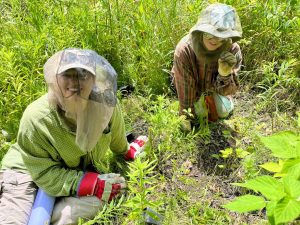 Kim was out of the office on Friday, leaving us to be pretty self-directed throughout the day. We began Friday with our usual five-minute warm up routine before suiting up to work on Hennen. The plan was to clip seed heads and pull parsnip which David marked on some maps for us until it was time for our next activity. I led us out on the trails until we hit our first spot which luckily only had three parsnips! We weren’t so lucky for the rest of the day, however. Once we found a handful on the other side of Hennen, kept appearing as if out of nowhere. The tall grasses and plants we walked through to get to the parsnip were slightly wet, making us all wish we wore boots on this particular excursion. We persisted nonetheless to tackle the parsnip invading Hennen. 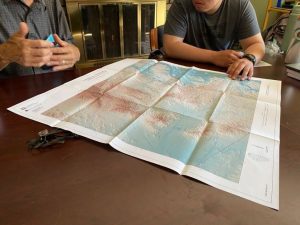 After about two hours or so of work, we returned to the office for our next activity: Features of the Landscape with Ders Anderson. When we previously had a workshop with Ders, I learned so many new things about local natural history and had a much better grasp on the physical environment and landscape compared to before meeting him so I was really excited to learn more from him. For the first hour and a half, Ders showed us different types of maps of McHenry County and talked a bit about the importance of wetlands and understanding the surrounding natural features. One main idea was that wetland restoration is vital to our ecosystem, however it is extremely difficult – the result of choices made by farmers over 100 years ago which left us with about 5 percent of the wetland habitat we originally had – not to mention the massive amount of development in McHenry County which has contributed to habitat loss. Ders also shared with us a soil map of our county and gave some historical background of why certain natural features may exist here. Afterward, we took a driving tour around Bull Valley to see some of the sites and landscapes Ders had talked about earlier. 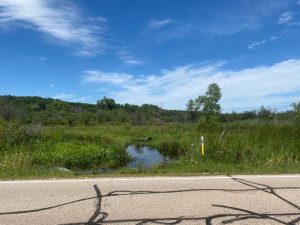 Once we returned from the trip, we graciously thanked Ders for coming to talk to us and then it was time to finish our invasive parsnip work at Hennen. On our walk back to the office, we found tons of mushrooms along the trail and collected them to make spore prints just as we had learned about earlier this week. We prepped everything for the spore prints, called it a day, and headed home for the weekend!

A visit to MCC, loads of toads and more – CLIP Week 9