The story of Timbertop is the story of a young lawyer and his bride, William and Edith Kelly, who were told, shortly after their marriage that due to medical concerns, the young lawyer would never be able to practice law again. They decided to buy a farm near Woodstock, and the adventure began. As it turned out, the young lawyer underwent surgery and was ableto return to his law practice. He commuted to his Chicago office by train until he retired. It was a good thing they had purchased the farm though, because shortly thereafter, the  Great Depression hit. They had a huge kitchen garden and kept chickens and a cow or two and so were well fed during the lean years in the ‘30s when their two children were young. Always interested in wildlife, The Audubon Society designated the Kelly’s land a Wildlife Sanctuary.

Flash forward 90 years to the year 2022. The place lovingly nicknamed Timbertop remains in the same family, owned by the Kellys’ daughter Margery and her daughters Susan and Jean. They now live on the east and west coasts, too far to visit, and have expressed the desire to sell the property to the next owners to enjoy as much as they have. The Land Conservancy began working with the family to find a way to preserve Timbertop and pass it on to the next owner. TLC partnered with The Conservation Fund (TCF), a national nonprofit conservation group. The group has a Working Farms Fund program that supports next-generation farmers with a pathway to farmland ownership, all while conserving endangered farm sites around metropolitan areas.

Margery and her daughters liked the idea of transitioning the land to a beginning farmer, as long as it was first protected from future development with a conservation easement. During conversations, TLC and TCF met Silvia Abel-Caines, a farmer with plans to expand her organic garlic growing business, Garlic eScape. The family was excited by Silvia’s story of how much she loves the property and her plans to grow healthy food and share her knowledge with on-farm workshops open to the community.

The Conservation Fund’s Working Farms Fund is supporting Garlic eScape’s expansion by purchasing the Woodstock farm property and entering into a lease-to-sell agreement with the farm business. The Land Conservancy will hold the conservation easement, allowing a future sale to Garlic eScape at its reduced, agricultural value.

“This is the first in what we hope turns into more farms preserved and transitioned to the next generation of farmers,” said Linda Balek, TLC’s farm program manager. “Getting access to land is a beginning farmer’s biggest challenge and the Working Farms Fund is a way to make it possible.” “Maintaining the land for farming and wildlife was a passion for the Kellys that has been passed on through the generations,” said Margery, Susan and Jean. “We are all pleased to welcome Silvia and Art to Timbertop and hope they enjoy it as much as we have.”

The Land Conservancy is grateful to the Kelly heirs and the many partners we worked with to make this transition possible, including The Conservation Fund, U.S. Department of Agriculture Natural Resources Conservation Service’s (NRCS) Regional Conservation Partnership Program (RCPP), Illinois Clean Energy Community Foundation, Grand Victoria Foundation, Northeast Illinois FarmLink and Food: Land: Opportunity, a collaboration between Kinship Foundation and The Chicago Community Trust, funded through the Searle Funds at The Chicago Community Trust. 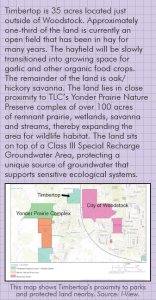