A visit to MCC, loads of toads and more – CLIP Week 9 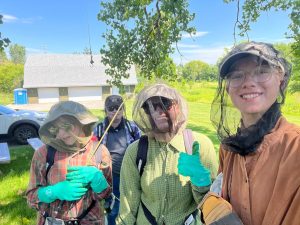 On Monday, we had a work day around Hennen Conservation Area in Woodstock. We started by planting nine flats of plants donated from Red Buffalo Nursery, in the back behind the pond. The mosquitoes were on the hunt but we wore bug head nets and mosquito spray. After lunch we journaled, drew and made bouquets from flowers Megan Oropeza, TLC’s restoration ecologist, brought to the office. In the morning, while Megan was driving she saw people collecting flowers on the side of the road. She stopped and told them these native flowers weren’t meant to be picked but left alone. She tried to educate them on native plants, and how picking these flowers lessens the chance of them growing back. After that we pulled Canada thistle around the Hennen office. After that we worked on our research project by correcting mistakes and adding photos. Lastly, we journaled for the day. 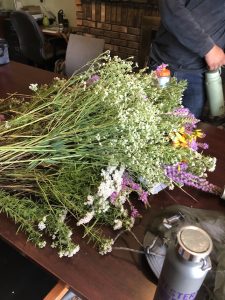 On Tuesday we worked with Sarah at Apple Creek, clipping parsnip seed heads and pulling parsnip. After lunch we went to McHenry County College (MCC), there we were given a tour of their native garden – some plants we knew and some were new to us. It was really cool to see so many plants we have learned about in one place. Emily gave us a tour of the farm with two shade houses; they had different fruit trees growing, and a native garden to attract pollintaors. They also had multiple 10-foot rows of different vegetables that they harvest and then replant something else in their place right away, so they can grow more in a limited space. The garden supplies their cafeteria and they have a small farmers market for students to buy from. They have the farm to give students more hands-on experience with managing crops, harvesting, cleaning and selling. Emily also gave us a tour of the greenhouse, where we saw their hydrophobic system and their cutting plants. After the tour we went to the master garden to look around and relax before heading back to Hennen. 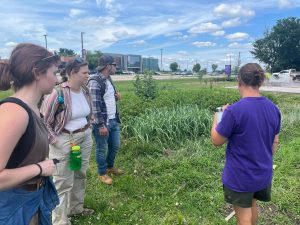 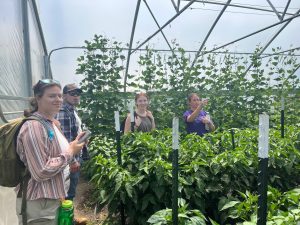 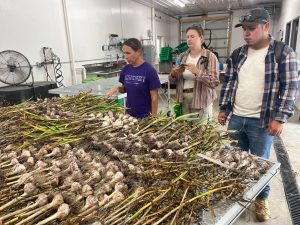 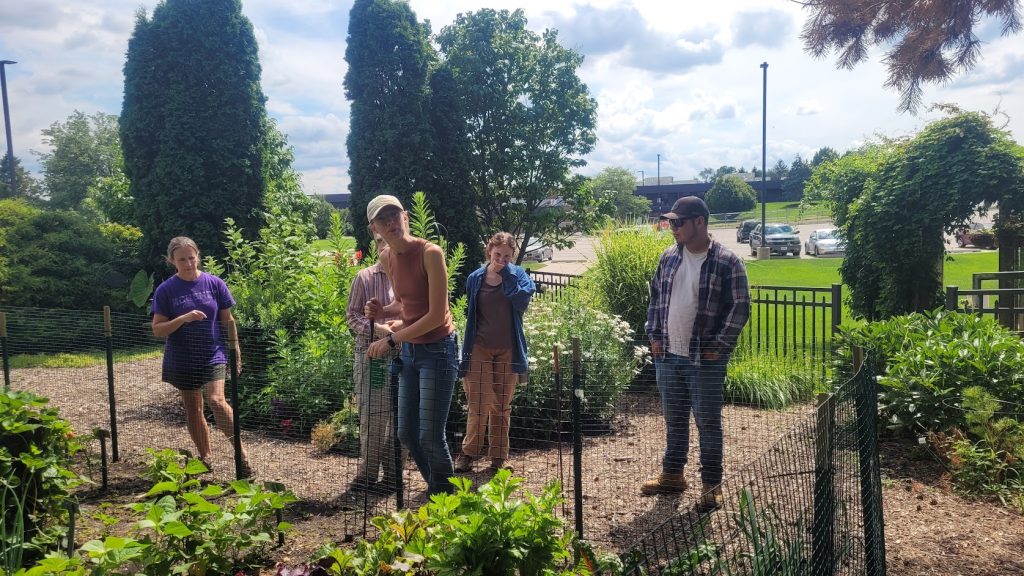 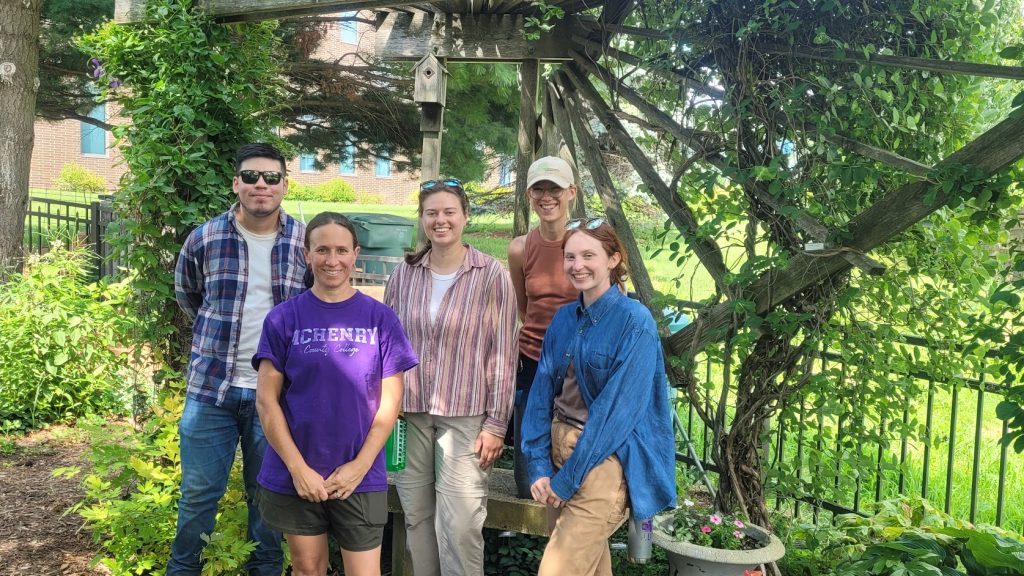 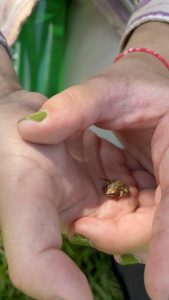 On Wednesday we started the day by going to the Emricson Park meadow, where we sprayed chicory, bind weed, and burdock with Garlon, and hand pulled Queen Anne’s lace. Next, we helped with the workday at Crowley Oaks by clearing buckthorn, apple trees and green ash. We also sprayed multiflora rose, baby buckthorn and bundle weed. There were a ton of toads and we managed to catch nine baby toads and moved them to a safe location nearby. After the work day we went back to Hennen for lunch. Originally we were going to go to Apple Creek to pull parsnip but the forecast called for rain, so instead we worked on our research project by counting the number of Rudbeckia triloba in each tray. After the rain passed we pulled gaint ragweed in the trails behind Hennen. We also saw an obedient plant, which if you move the flower heads they stay in place. Lastly we journaled about the day. 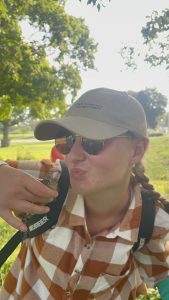 On Thursday we picked up trash from around Hennen, then we packed up the truck with parsnip predators and paper bags. We went to the workday at Irish Oaks Savanna. Each of the interns took turns working with the brush saw and chain saw. After the workday we went to a property in Johnsburg that is being turned into a prairie. It was seeded twice but it wasn’t working because when they scalped the land, the seeds were just turned over and the invasives just keeping coming back. We walked around, making a list of both native and invasive plants on the property. We wrote these down to see what type of future treatments or work needed to done. For example, most invasives were not woody, so mowing was the best option to reduce the amount of invasives. We also recorded the native plants that were there to see the progress over the coming years. We pulled a little bit of parsnip and sweet clover on the property. After that we went to Rusty Malts in Ringwood and got ice cream! 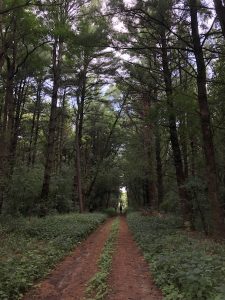 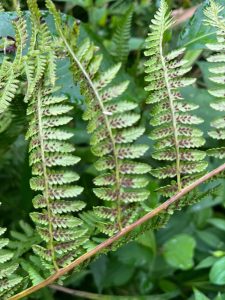 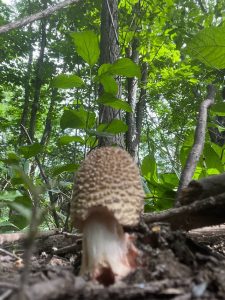 On Friday, we started the day by packing the truck with the herbicide backpacks with Garlon, paper bags and two parsnip predators. We went to the Clark easement with David and split into two groups; one clipping teasel seed heads and the other group spraying the teasel after the seed heads were clipped. Afterward we went to Wolf Oak Woods and pulled a dead tractor and wagon back to its home. It was quite the workout and we noticed that there was a lock on the tires about ten steps away from its destination. After that we came back to the office and had lunch, and talked to Lisa about our resumes, self advocacy and strong interview skills. We did a peer review of our resumes and added notes about what needs to be fixed or added. We closed out the day by journaling and doing a bit of drawing. 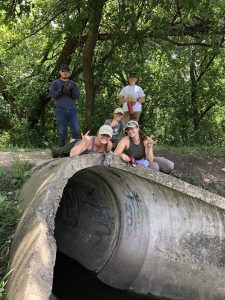