After the day off on Monday, July 4, we kicked off our 6th week of CLIP on Tuesday with a morning of parsnip pulling at Irish Oaks. Though it was hot and humid, we managed to battle quite a bit of parsnip around the site. Along the way, we spotted some swamp milkweed (Asclepias incarnata), whose fragrant blooms were just getting ready to burst. After eliminating a good chunk of parsnip throughout the site, we were exhausted and eager for lunch. Because the morning was full of intensive invasive work, we spent the rest of the day doing various indoor activities and prepping for a hike the following week. 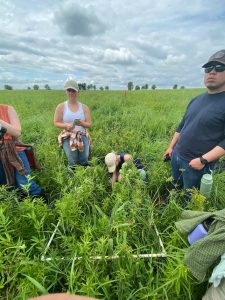 Tuesday brought our Midewin field trip! I wasn’t able to attend this field trip last season, so I was stoked this time around. I certainly was not disappointed! We started off our visit by tagging along on vegetation sampling with some botany and wildlife techs, Michelle and Grace. Since sampling has to be completely random, the process includes coin flipping and random number generators in order to ensure the sample is unbiased. Once we arrived at that point, we threw down a 1×1 meter square onto the vegetation. Our first official step was to take the duff measurements, or measurements of the dead vegetation underneath the live plants, at 3 points along the square marked by bolts. Generally, the duff measurements ranged from 0 (bare ground) to just above an inch. After taking duff measurements, the next step was to ID and record every plant species in the “small square” inside of the big square, which was roughly .5 x .5 meters and marked by yellow tape. Plant diversity is key, and so making an effort to ID every plant we saw was incredibly important. After we were done with the small square, we moved on to the rest of the square and repeated the process.

For me personally, it was very rewarding to be able to put my plant knowledge to a good use, and it was even more exciting to be able to learn so many new plants. It was also very important to look among the duff to see if any baby plant species were growing, as they can often get hidden underneath the towering Silphiums and Andropogon gerardii. Smaller plants, such as Trifolium spp. and Medicago sativa, often grow close to the duff cover and take a keen, observant eye to be noticed. After all the plant species were ID’d to the best of our abilities, our next and final step was to estimate the dry weight measurements. For this, we estimated the top three plant species in the transect that held the most weight. At this particular site, various grass species (but mostly Andropogon), Silphium laciniatum, and Zizia aurea generally held most of the dry weight. The morning went by really fast for me and we were eating lunch before I knew it. Prairie plants have an incredibly rich history and I love learning about them, so spending time with them is always a blessing. I had a ton of fun and as crazy as it might sound, I wouldn’t mind doing just that for the rest of my life. I think it really is an addicting process – no matter how many plants you know, there will always be new ones to learn, and today was an excellent reminder of that. All in all, we officially learned over 25 new plant species just this morning! Some of my personal favorites included the Downy sunflower (Helianthus mollis), and Sullivan’s milkweed (Asclepias sullivantii). 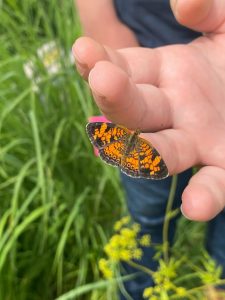 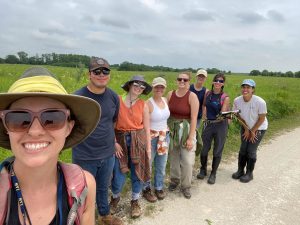 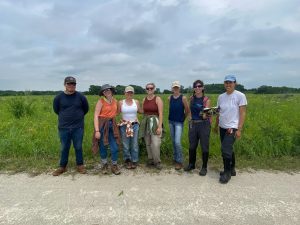 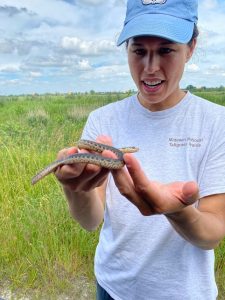 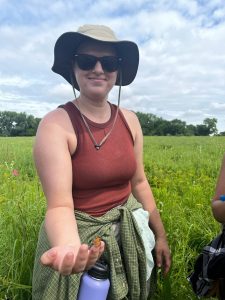 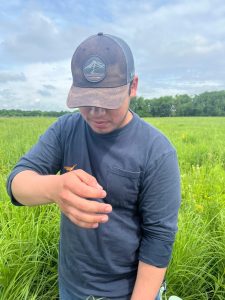 After lunch, we headed over to the gem of Midewin – its dolomite prairie. The dolomite prairie is considered one of the rarest habitats around the globe, due to its sedimentary bedrock, shallow soils and poor drainage/limited moisture storage. Its specific set of characteristics allows it to support a unique set of plant species, specifically those without long roots (such as common prairie plants like the Silphium family), including Illinois bundleflower, leafy prairie clover, prickly pear cactus, and whorled milkweed (Asclepias veticillata). Oftentimes, the bedrock is completely exposed, providing a type of habitat completely unlike any other we had previously seen. It made for a perfect end to the visit, and served as a reminder of how lucky we are to have these experiences. We were also able to climb up one of the bunkers before we left! 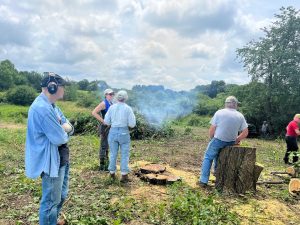 Thursday brought a long day of parsnip pulling. We headed over to the Irish Oaks workday, and while Casper and I helped out the volunteers, the rest of the interns headed off to pull parsnip further back in the site. After a halfway break (and plenty of delicious rhubarb pie, thank you, Larry!), we switched, and Casper and I headed off to battle the parsnip while the rest of the crew worked on woody invasive removal at the burn pile. We regrouped and had a lunch break, then we went back out into the field at Irish but this time to battle garden valerian (Valeriana officinalis), which is easily removed by pulling. Valerian is a garden escapee from the southern Wisconsin area, and is becoming quite a prominent invasive in Northern Illinois, especially at Irish Oaks. Once the sun became too hot and we had made a good enough mark on the invasives, we headed back to headquarters. While the interns stayed at Hennen to prep for our Youth & Family Center hike the next week, I went out to run a couple errands and monitor the shooting star (Dodecatheon meadia) population at one of our sites. I was pleased to see the seed is coming along nicely. 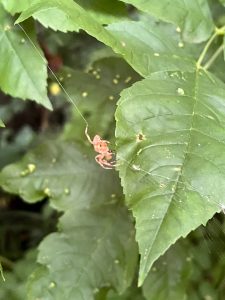 Friday was a bit of a change in pace. While Kim and the interns headed off to monitor Pistakee Bay with Randy Schietzelt, I went off to Ryder’s Woods and Donato Conservation Easement to monitor seed progress of the feathery false, starry false, and regular Solomon’s seal. They were all coming along nicely, so I headed back to Hennen and finished up a couple things for upcoming events. Then, my next task was to plant some turtlehead plants at Hennen along the pond. Though I’m usually used to having help while planting, going solo was interestingly therapeutic, especially with the steady drizzle of rain creating a peaceful environment. After transferring the turtleheads to their new home, I made sure to mark each cluster with flagging tape and put it on the map. Covered in mud and a little soaked but enjoying myself nonetheless, I headed back into the garage to mix a couple jugs of herbicide, which would be used on invasive species at Wolf Oak Woods (thanks for keeping it interesting, locust….). Finally, I went back inside to eat lunch with the other interns, and caught up on their excursion at Pistakee Bay. Afterwards, I dropped off the herbicide to its respective location and then mixed some more herbicide, later to be used at Irish Oaks. At this point, it was around 3:30 and all of us plus Lisa took a little field trip to Woodland Hills to check in on some signage that had gone awry. Along the way, I spotted a common jumping spider that was hiding in an old sign. Though I personally thought he was a beautiful sight, my feelings of awe were not shared among the whole crew. Nonetheless, his long green fangs and huge hairy body were a great way to end the week.