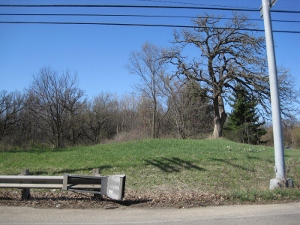 The first TLC easement was accepted in 1991 from Leta & Alice Clark at the corner of Thompson Road & Route 120. The sisters wanted to be sure that their “Wildflower Preserve” was never developed, despite a friend’s comment that the corner “would make a perfect spot for a gas station” one day! Actually, legend tells me that the friend’s comment is what led the sisters to seek out someone to help them make sure that fate would never befall their lovely corner.

The photo was taken in April 2010 while driving past on Route 120, heading from McHenry to Woodstock. About 10 years ago, IDOT redid the intersection and took some land along Thomspon and 120, which I believe led to the eventual die-off of several oaks that were very near to the roads.

There was an enormous bur oak right at the corner that died in 2009. Some say “fungus” was the cause, but I feel in my heart that the bur oak’s fate was sealed as soon as its roots were cut and crushed during the road work a decade ago.

I have started to think of these oak trees as if they were people. It’s not that far-fetched, really. Sure, they live 2-3 times longer than most people, but they cannot reproduce until they reach some stage of maturity — about 20 years old. Each oak is unique, and grows more distinctive as it ages.

As most people age, it isn’t usually one thing that kills us, it’s some combination of things that add up over the years. Well, why wouldn’t it be the same for our oaks?

I would like to think that we can afford these elders a little respect, rather than seeing how much abuse they can take before they succumb?