Are the bats trying to tell us something? 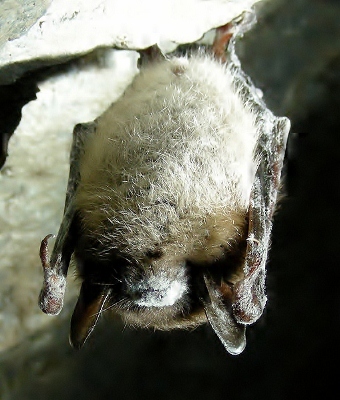 I read an article about bats in the most recent University of Vermont alumnae magazine today. It made me want to cry.

Bats are dying due to a little-understood disorder called “White nose syndrome.” The disorder causes the bats to wake frequently throughout their winter hibernation, and since they are hungry when they wake, they fly off in search of insects – their primary source of food. The problem is that in the winter, there are no insects, so the bats expend valuable energy in futile searches before returning to their winter slumbers. By the time they wake in the spring, the bats are so emaciated, that they are susceptible to other illnesses that healthy bats can easily fight off. So, the bats die from a variety of things, so it has been hard to pin-point the exact cause of the syndrome.

Researchers at the University of Vermont have been studying the bats in Vermont, trying to determine what is causing this disorder to decimate the bat populations across the country in a very short time period. Consider: the disorder was first identified in eastern New York state in 2006, and since that time has killed millions of bats in the Northeast US, rapidly spreading down the east coast, and towards the Midwest.

There have been articles in the local paper recently about the discovery of rabid bats in McHenry County, warning people to avoid coming into contact with bats in the event the bats are rabid. So, there may be those who think that bats are dangerous to people, so who cares if bats die?

Well, maybe we should care if all the bats die.

As one of the researchers comments in the article: the bats could be the canaries in the coal mine, perhaps giving us a warning about the general degredation of the environment that we all depend upon for life. Consider that frogs and toads are dying off at an alarming rate across the globe due to a fungus. And Colony Collapse Disorder is affecting bee populations across the US. With no known cause, the loss of bee populations has the potential to destroy the country’s agriculture system, as bees are the primary pollinators for many crops!

Do we really want to take the chance that these dramatic die-offs of three unrelated groups of organisims are just a weird coincidence? Or are we prepared to heed the warnings and start making changes to clean up and improve the environment that we all depend upon for survival?

After all, the coal miners couldn’t see or smell the invisible gas that killed the canary, but they knew enough to heed the warning that the dead bird gave them. Unlike the coal miners, we can’t just move out of the mine into the clean air. We are living in the mine. Will we take the steps necessary to clean the air, water and soil around us before it’s too late?