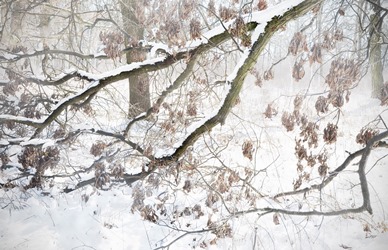 Why is it so cold? Simply put, cold is caused by the absence of heat. Sometimes conditions are such that there is much less heat in an area. For instance:

Snow cover reflects solar radiation. That means, that if the ground is covered in snow, even on a sunny day, the sun doesn’t warm the earth because the sunlight is reflected back into space.

Shorter amount of daylight mean less time for the sun’s warming rays. Plus, during the winter season, the sun strikes the earth at a sharp angle, meaning the sun’s rays are spread out further (less concentrated), so they have less warming power.

Lack of cloud cover at night allows heat to escape into space. While I love those beautiful winter nights when the sky is clear and the stars are bright, I know that the lack of cloud cover means that any heat that may have accumulated during the day will be lost to space. When there are clouds, the cloudcover helps to trap the heat in the troposphere (lower level of the atmosphere).

“Bitter cold” is a term that’s getting a lot of use this winter – and with good reason. The word bitter – while typically used to describe something that has a disagreeable taste – means something that causes a harsh or stinging sensation, which is exactly what very cold weather will do.

With a high of -15º forecast for Monday (January 6th), and wind making it feel even colder, I think it’s safe to say that Monday’s cold will be bitter indeed.

From a health standpoint, there are many reasons to be cautious when venturing outside in this weather: