Voices of the Land – Josephine Elsen

Josephine Elsen’s family has a long history in McHenry County. She traces her ancestry back to John Finch and Eliza Jane (Britton) Finch, a couple who arrived from the Northeast in the 1850s. They purchased 160 acres, since whittled down to 148, west of McHenry in 1862.

And through the family name changes from Finch to Straw to Elsen (the heirs were all women), the property has always been known as Finch Farm.

The Finch family has always been interested in their blood as well as their soil. Elsen’s great-aunt Etta Finch, who she refers to as “Aunt Etta” in correspondence, wrote down her stories of life on the farm as a newspaper serial. Elsen’s mother, Olive Eleanor (Straw) Elsen, donated a legal abstract for the property to the McHenry County Historical Society, among other work. And the Historical Society’s Finch file is filled with handwritten letters and photographs from Josephine expanding on her mother’s work and family history.

Elsen has also taken steps to preserve Finch Farm for the future. With developers circling, she placed an easement on the entire property: 20 acres of oak woods for nature, and the rest to ensure Finch Farm will always be a farm. “If we’d sold it, you’d have developments and there’d be nothing left. This is the best way to save something that’s been very worthwhile,” Elsen said.

Since she put the farm in an easement, Elsen said she’s received few offers. But she’s still concerned about the future of the farm. Elsen lives in Wheaton – the farm has been occupied by tenants since the Depression – and has no children. She is concerned that the farm will be combined with others and lose its historical identity. The concern is a valid one, she says, because her current tenant works 1500 acres across other properties.

“They seem to want to get everything in one big heap, instead of independent farms,” Elsen said.

Already, the character of the farm has changed. Elsen currently rents out both the fields and the house. “[But] I don’t know if people are going to be able to use the house eventually if it’s all going to be farmed,” she said. Despite some bad tenants – one stole the light fixtures and summer screens when the lease was up – Elsen likes someone to be living on her family’s farm

Another change is the transition from a cattle and dairy farm to an agricultural one. The oak woods Elsen put into conservancy were at one time pasture, and only sprang up when dairy farming was abandoned. A more concrete and troubling one is the condition of the family’s valued barn, which is a historical marker. “Mother always kept the barn gray, said never paint it red,” Elsen recalls.

In the absence of cattle, the barn is nothing but a historical curiosity. And it’s falling into disrepair. One of Elsen’s nephews installed insulation and a new tin roof some years ago, but he since died in a tragic accident. The tenants have little interest in it. With no one to care for it, Elsen is worried about a piece of her family history she worked to have recognized.

One story Elsen is fond of telling takes place during the Depression. She recalls that a young couple leasing the farm fell behind on their payments. Instead of evicting them, her mother agreed to let them stay as long as they kept up the farm. They kept everything in good repair, said Elsen, and “they stayed for 35 years.” That was when they worked and lived on the farm. The current agricultural tenant is a remote large-scale operation, and the housing tenant doesn’t work on the farm; Elsen too will have to look elsewhere to save the barn. 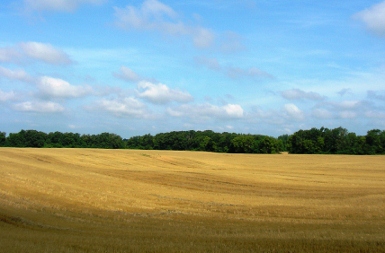 Elsen herself hasn’t visited the farm in several years. The drive from Wheaton is a long and, Elsen says, increasingly ugly one. “It used to be a lovely drive,” she said, but it’s been marred by development. The family once held gatherings at the farm, including a celebration when the barn was declared a historic landmark, but now Elsen leaves the farm visits to her property manager despite the urgings of her nieces and nephews.

Whether Josephine ever returns to her farm or not, even if her mother’s prized gray barn doesn’t survive, she and her family have worked hard to ensure that Finch Farm occupies a prominent place in McHenry County’s history as well as its future. Hopefully, someday one of her nieces will pick up where she left off and add another name to Finch Farm’s rich history.