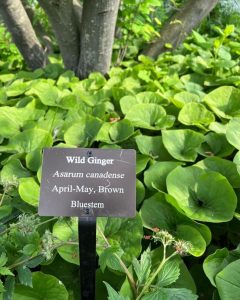 To kick off Week 3 of CLIP, we all headed out to Bluestem Ecological Services, a native plant landscaping company in Marengo. We began our visit with a brief lunch and an introduction to Bluestem’s mission of restoring and maintaining native ecosystems. There, we met a few of the members of the team: Sarah Voska, Eric Sebert, and David Stout, who gave us a tour of their facility. The natural surroundings were absolutely stunning with breathtaking views all over their 200+ acre property. While walking the trails through the prairie and woodland areas of Bluestem, we could see the positive effects native landscaping and proper management had on the land. Few invasives could be spotted, and high quality natives, such as sedges, were widespread. Towards the back of the woodland was a herd of bison that unfortunately was in hiding as a result of the heat and humidity that day. Evidence of the bison’s presence in the area could be easily determined by the massive wallows left in the ground, where  bison make depressions in the ground as a social activity, in addition to doing so to protect themselves from ticks and other insects.

After our tour of Bluestem, we went inside to hear a presentation about the United Nations Decade of Ecosystem Restoration from Sarah Voska. It was really impressive to hear Sarah’s involvement in the UN task forces involved in this mission and completely opened the interns’ eyes to just how much progress we are making towards ecosystem restoration. Hearing about the policy side of these issues was inspiring and also opened up ideas for other career options within the field of conservation. After the slideshow, Sarah asked the interns some questions regarding conservation and restoration and how to best involve youth in those subjects. Our Q&A session was really productive and I think we all got a little more hopeful about the future of land conservation and our natural world. To conclude our trip to Bluestem, the interns got to do some of their own native landscaping and land management! After some weeding and plant identification, it was time to return to Hennen. We graciously thanked the Bluestem team for having us and went off to have dinner at the office with Kim Elsenbroek, our CLIP leader. 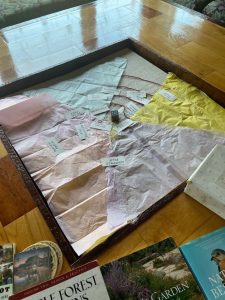 Tuesday was the hottest day of the week, reaching a heat index of 106. It also happened to be the day we were visiting Small Waters Education, where we were to plant a garden at Jack and Judy Speer’s food forest. Despite the sweltering heat, the interns had a ton of fun at Small Waters!  Jack and Judy had a lot of knowledge to share with us and we were ready to learn. We began the day with a tour of their food forest right in the front yard of their Harvard home. The design of the entire land and house was based around the idea of “permaculture” which is the topic Jack and Judy aim to teach everyone who visits Small Waters. Permaculture is a land management approach in which a person designs a plot of land with natural patterns in mind. An example of this would be designing a garden which followed the patterns found in a leaf structure. After learning about some of the functions of the food forest, we got to planting a garden residing in the food forest. Planting native pollinator plants is highly beneficial to a food forest, as it will allow pollinators like bees and butterflies to attract to the area and pollinate the plants that provide food. After planting the garden and using the mist setting on the hose to cool off, we learned the history and layout of the rest of Jack and Judy’s property. Beautiful oaks were scattered in their backyard among other native plants. We soon took a break for lunch and spent the rest of our visit inside Jack and Judy’s home, reviewing a presentation on permaculture in addition to playing a design game revolving around the topic of permaculture. The objective of the game was to decide where to locate different things on a plot of land (greenhouse, compost, mushroom log, goat pen, etc) based on zones and sectors. Zone 0 was the house or “homebase” and the following zones extended past Zone 0 in concentric circles. The sectors were essentially triangular parcels extending from the center out. This game really solidified the interns’ understanding of how permaculture can be implemented in so many parts of life in order to create and preserve really high-functioning ecosystems. This concluded our day at Small Waters, and we parted ways with Jack and Judy to continue our day at Hennen. For the remainder of the day, we did a ton of plant identification and note-taking in our collection books where we log different types of plants, both native and non-native. 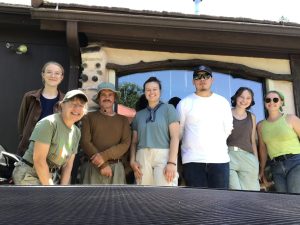 Wednesday was divided into two parts. For the first half of the day, we went out to TLC’s Crowley Oaks site where we were collecting curly styled wood sedge seeds. Collecting sedge seeds is a very tedious process, yet very relaxing. Being both patient and observant was necessary, which made the experience really enjoyable for me! Removing the seeds was pretty easy because they were ready to be collected. By simply wrapping your hand around the stem and pulling up, the seed slid off  into our hands, ready to be dropped into our collection buckets. It was difficult to feel as though you made much progress because the seeds are so tiny, but by the end we had collected a good amount of seeds. We found a really large area of sedges towards the back of Crowley and we sat for a long while just slowly chipping away at each individual stem. After finishing up with our collecting, we hiked back on the trail to the truck and returned to Hennen for lunch and the second half of the day. Post-lunch, we planted plants near the pond at Hennen for a few hours. Meanwhile, one by one, each intern did some GIS, or geographic information systems, work with Kim on the computer. GIS is a difficult concept to grasp at first because there is a lot of information to learn all at once, but we are slowly getting the hang of things. Learning about a more technological aspect of the field of conservation was definitely unexpected, but totally necessary and effective for restoration work. I’m sure it is a skill we will be getting a lot more familiar with as time goes on. 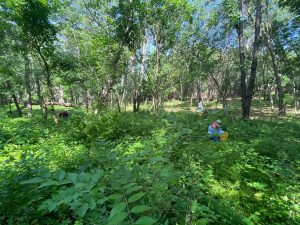 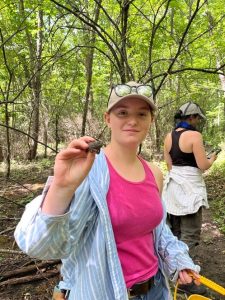 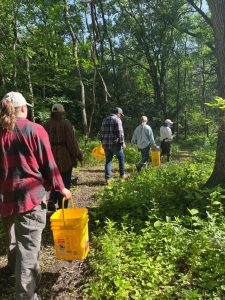 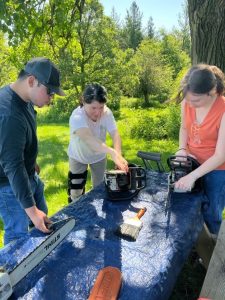 Thursday brought a lot of excitement and even some anxiety. It was a really important day – chainsaw training day. Our training was led by TLC’s restoration staff, Megan Oropeza and David Ducci. Very few of us had experience with power tools and I think we were all a little nervous to use something as major as a chainsaw. Our anxieties quickly dissipated as our training began. The first task was for each of us to dissasemble a chainsaw, clean it, and practice assembling it. The most time-consuming part was making sure the chain was attached properly and had just the right amount of tension on it. Eventually we all got our chainsaws to that sweet spot and it was time to practice starting the chainsaws. The first step was to make sure we had enough gas and oil before we choked it. After this, each of us practiced starting the chainsaws – safely, of course, with the chain brake on. Everyone successfully started the chainsaws, and also looked cool doing it! Our pre-use training was done and it was time to actually use the chainsaws. Megan and David took us to the pine woods of Hennen to practice sawing a felled tree. We put on our chaps and other safety gear: glasses, ear plugs and leather gloves. One by one we all took turns sawing some branches and then cut a “cookie” or sliver of the trunk off for ourselves as a keepsake. Shortly, we paused for a quick lunch, and then we finished cleaning up the tree we were previously working on. We then moved on to felling a tree by ourselves. The first step was assessing the tree and surrounding area to determine where it may fall and potential hazards to look out for. Then we made our face cuts and then back cut. I was having a little trouble making sure all of my cuts were aligned. Thursday was a really good lesson in patience with yourself. Chainsawing was a really difficult but impressive task and all of us made massive progress compared to the beginning of the day. 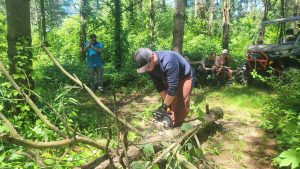 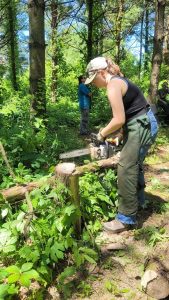 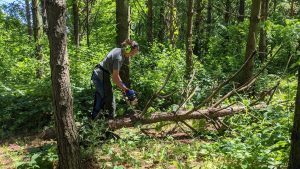 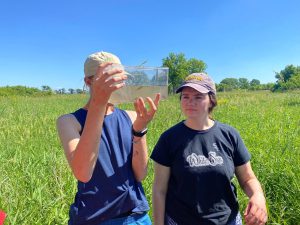 The final day of week 3 of CLIP quickly came and went. We met Randy Schietzelt, a TLC Board member, for a super fun day of stream testing out at Gateway Park in Harvard. In addition to the CLIPterns, the Environmental Defenders of McHenry County interns, Grace and Jay, joined us. After a brief outline of our goals for the stream testing, we divided up into teams to tackle the stream. Bree, Isaac and I went upstream sweeping under overhanging vegetation, hoping to find a high diversity in fish and invertebrates. Casper, Grace and Jay went downstream doing the same. Walking through the stream was a difficult process as each step sunk our feet further into the ground. We each took turns trading off who was holding the collection bucket and who was using the net. It was hard to tell exactly when to finish collecting, but after a while of seeing a lot of the same species – basically tons of crawfish – we made our way back to where we started. Randy sifted through the species we brought back and gave us a quick lesson and the types of things we saw. There were a lot more than we had all initially expected to find! After putting the fish and invertebrates back where we found them, Randy treated us to some ice cream at Culver’s and we inputted our results from the stream testing to determine the IBI, or index of biological integrity, of the stream. After we did our calculations, we found the stream to be of fair-to-good quality with a good amount of biodiversity. 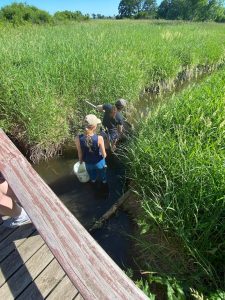 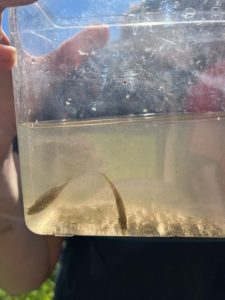 The remainder of the day was spent back at Hennen preparing for the Pollinator Safari happening next weekend, which involved a quick trip to TLC’s site Boloria Meadows to identify some native pollinator plants at the site that could be implemented into the safari program. Week 3 was a success and jam-packed with more knowledge at every corner. The other interns and I can’t wait to see what the following weeks bring.