Climate Change and the Future 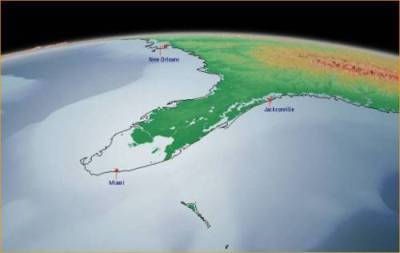 Did anyone else notice that the President mentioned climate change during his victory speech early Wednesday morning? Specifically, he said: “We want our children to live in an America that isn’t burdened by debt, that isn’t weakened by inequality, that isn’t threatened by the destructive power of a warming planet.”

That sounds like three priorities: reduction of the National debt, equal rights for all Americans, and doing something about climate change.

For months, I have been frustrated by the absence of a National dialogue about climate change. The topic did not come up during the Presidential debates – not even a passing reference. This, despite the fact that our own Defense Department has stated that global climate change will have national security implications for the US, as rising sea waters inundate US military bases as well as low-lying nations and as changing weather patterns cause water shortages in some countries and flooding in others.

“We will pay for [climate change] one way or another,” Gen. Anthony C. Zinni, a retired Marine and the former head of US Central Command, wrote in a report he prepared as a member of a military advisory board.  His report goes on to say that America can pay dollars today to reduce its greenhouse gas emissions, or it will pay later through loss of life as the US faces more military conflicts through the political instability that climate change will cause.

So what? How does that affect us here in McHenry County? Why should we care?

Well, aside from concern about the impact to habitats and species, consider that McHenry County will have young people whose lives will be at risk in future military conflicts as nations fight over water and possibly land for their citizens. And, there is every reason to believe that the United States will continue its long tradition of welcoming refuges from throughout the world, and those people will need to have places to live. Population pressures in the US in the future will impact McHenry County, especially with our location within the Chicago metropolitan area.

I hope the next four years brings rational discussion in the US aimed at taking meaningful action to address climate change and to reduce the risks of future global instability that will result if nothing is done. Let’s not push this problem off onto a future generation.