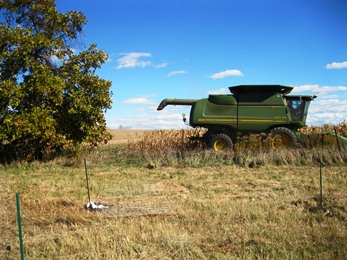 What is conservation? The definition is “the careful preservation of something.”

Conservation is talked about typically in the context of nature, water, soil, a historic structure, artwork, and the like. In other words, there are many different things that can be conserved.

When people talk of land conservation, what do they mean? A quote from Aldo Leopold may help clarify: “Land, then, is not merely soil; it is a fountain of energy flowing through a circuit of soils, plants, and animals.” Thus, conserving the land is conserving life itself.

Recently, someone asked me whether farming is compatible with conservation.

Oh boy, where do I start?

The Federal agency that works with farmers is called the Natural Resource Conservation Service (NRCS). Since 1935, the NRCS, and its predecessor, the Soil Conservation Service, has worked with farmers to help ensure farming is done in a way that conserves both soil and water resources on the land so the land will be available for crop and livestock production forever.

The agency was formed as part of the U.S. Department of Agriculture in 1935 during the Dust Bowl when Congress passed Public Law 74-46, which states &quot;the wastage of soil and moisture resources on farm, grazing, and forest lands…is a menace to the national welfare….”

Maybe you saw Ken Burns’ documentary “The Dust Bowl,” but if not, here’s a quick summary: in the 1920s, areas of the great plains (Central United States and Canada) were being over-grazed and intensively farmed in ways that left top soil exposed to the elements. When an 8-year period of severe droughts hit the area in the 1930s, the soil literally blew away – as far away as Washington DC and New York City. In some places, 75% of the top soil was lost.

National leaders recognized that the rich prairie soils of our country were one of the most valuable natural resources the country had, and steps needed to be taken to ensure it was not wasted.

At the time, the new agency’s mission was to help farmers take better care of the land.

Today, the mission is to provide “America’s farmers and ranchers with financial and technical assistance to voluntarily put conservation on the ground, not only helping the environment but agricultural operations, too.”

There are various funding programs offered by the USDA through the NRCS. Examples include:

It is up to each farmer to decide what soil and water conservation practices he or she will use on their farm, but there is no shortage of good information and technical experts to help them make decisions that will conserve their land.