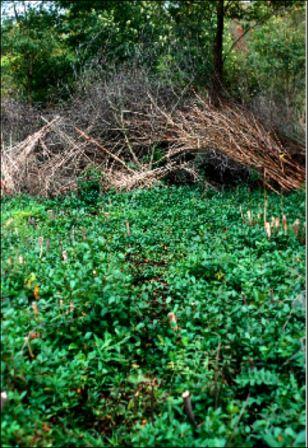 Any day now, a faint green will start showing up in local woods right at eye level. While the spring color may be welcome to one’s winter-weary eyes, it is a sign of trouble for native oak and hickory trees.

The problem with the first green of the year is that it grows on buckthorn and honeysuckle shrubs that are not native to this area. The non-natives shade out native spring wildflowers like trillium, shooting stars, Solomon’s seal and wild columbine. They also shade out young oaks and hickories, trees that need a lot of sunlight to grow.

Buckthorn and honeysuckle have several advantages over the native species. Not only do they sprout earlier in the spring, but they stay green longer in the fall. Additionally, the non-native shrubs do not have to contend with the diseases and pests that kept them in check back in their native lands.

The extended growing season benefits the plants in a couple of ways. First, it gives them more time to store up energy in their roots through photosynthesis (the process whereby plants turn sunlight into energy). The chlorophyll in plants’ leaves (it makes them green) is used for photosynthesis. Another advantage to having a longer growing season is that the early-sprouters are able to reduce competition by keeping sunlight from reaching the ground which in turn prevents other plants from growing.

When the plants were moved to this area, they gained an advantage over native species because none of the pests or diseases they kept them in balance was moved with them. Plants, insects and animals that are native to an area develop a balance over millennia that prevents any species from becoming dominant. Without checks on their growth, the non-native plants can quickly dominate.

Humans have seen this scenario play out time and again, yet somehow society continues to move species from one part of the world to another – resulting in some dire situations.

In the Florida Everglades, Burmese pythons that were released by their owners (when the “pets” grew too large) are devastating the native animal populations, and could cause an ecosystem collapse. The snakes are well camouflaged for life in the Florida swamp, and the climate is ideal for them to breed, so the numbers grow.

In the southern United States, the kudzu vine from Japan was first promoted as an ornamental plant and then planted by the Civilian Conservation Corps during the Great Depression as a way to control erosion. Today, this vine is known as the “Vine that ate the South” because it grows so aggressively (up to a foot a day). Kudzu is resistant to most herbicides, and experts say that it can take up to ten years of repeated spraying with chemicals to kill the plant.

In this area buckthorn and honeysuckle threaten the survival of oak woodlands – one of the most endangered natural communities on the planet.
Fortunately, there is hope. Buckthorn and honeysuckle can be controlled if one is willing to cut and herbicide the plants. Combined with reintroduction of fire as a land management tool, the non-native plants can be kept in check, and the native trees and wildflowers will thrive once again.

In addition to removing buckthorn, honeysuckle and other non-native plants from our local natural areas, it is also helpful to plant more native oaks and wildflowers.

Purchase locally grown, native oaks and hickories through TLC for pick-up in May. Check www.ConserveMC.org, or call 815-337-9502 to place an order.