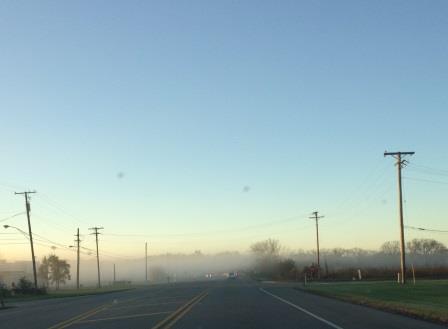 “The fog comes on little cat feet” wrote Illinois poet Carl Sandburg in 1916 as he watched the fog roll in at the Lake Michigan shore in Chicago. The next line, “It sits looking over harbor and city on silent haunches and then moves on” describes the fog as it settles in for a while before retreating again.

When I first read those words in grade school, I admit that they didn’t make much of an impression. The cats I knew were like my pet Tuppence who thumped when he walked. Did fog thump?

Reading the poem today, I actually feel a slight chill, for as an adult I have experienced the beauty and mystery of fog in its many forms.

There are three types of fog: evaporation, advection and radiation.

What Sandberg described was most likely evaporation fog. This type of fog occurs when wind blows cold air over warm water – as happens in the fall and early winter along the Lake Michigan shoreline. The lake’s water is still much warmer than the air, so if the air is blowing in from the east, a heavy fog may result as the air picks up moisture evaporating from the warmer lake water.

The winter fog that coats tree branches with a thin film of ice is also a type of evaporation fog. As cold air passes over warm, moist land, evaporation increases the amount of moisture in the cool air to the point that the air can no longer hold all of the water it contains. Thus fog arrives, and an icy hoar frost results.

A decade or more ago on a camping trip, I saw the fog roll in off the Pacific Ocean at Point Reyes California, and then watched it return to sea. This was advection fog where wind blows warm moist air over a cool surface – in this case, the ocean. The ocean water cools the air, causing the air to approach its dew point, resulting in fog.

In this area, the most common type of fog is radiation fog. On clear, calm nights, fog forms as the ground surface cools rapidly, dropping the air temperature to its dew point. This type of fog is most common in the fall and winter, and if the air is still, can last all night long, disappearing as the sun rises and the air warms.

The photo at the top of the page is most likely radiation fog that I saw while driving through Harvard on the morning of November 4, 2016. The area where the fog can be seen across the road has farmland and open land on either side – ideal conditions for the formation of radiation fog.

For all its beauty, fog can be hazardous. In 1945, a B-52 airplane crashed into the Empire State Building in New York because of heavy fog and in 1977 two airplanes crashed on a runway in Tenerife (Canary Islands) because of limited visibility due to fog.

Fog has caused fatal car accidents in places as diverse as California, Dubai, and Tennessee. The fog not only reduces visibility, it also reduces contrast, muting everything to shades of grey, which in turn reduces one’s ability to judge distance and speed.

Fall and winter are the peak fog seasons in McHenry County. So, when driving in the fog, slow down, turn on the low beams, don’t pass other cars, and do not talk on the phone. It may come in on little cat feet, but don’t be fooled, that fog can be a beast!

Adapted from a column first published in the Woodstock Independent October 2009.