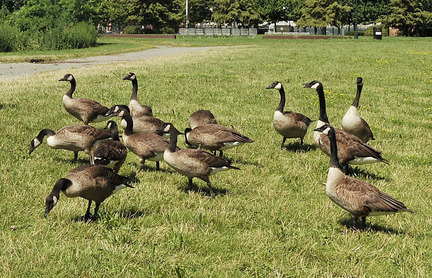 I heard them before I saw them, hundreds of Canada geese. A raucous honking as the birds circled a pond, vying for a spot to spend the night. The sun was near the horizon, and as I drove home, I noticed ribbons of the birds flying as far as my eyes could see – some in the classic V-formation, others in long lines. All, presumably, in search of open water where they would spend the night.

Branta canadensis, as it is known to scientists, has proved to be a highly adaptable species that benefitted greatly from the rapid suburbanization of metro areas like Chicago since 1980. In fact, the geese like the suburbs so much, that many have stopped migrating – they are now considered a year-round resident species. Geese like the suburbs for several reasons: habitat, food and safety from predators.

Canada geese like open water, especially when it is free of places where predators can hide. People call these areas stormwater detention ponds, and have a tendency to keep the lawn mowed right up to the edge of the water. To a flock of geese, these neatly manicured detention areas are perfect.

Geese are herbivores, meaning that they eat mostly plants. They like grass and corn (which is a type of grass). And if there is one thing the suburbs have in abundance, it is grass. Plus, as development marched steadily westward into agricultural areas, the suburbs also put detention ponds and farm fields in close proximity. To the geese, we could not have planned it any better.

Finally, the suburbs tend to have fewer predators to bother geese. Many suburban communities have implemented programs to cull coyotes that might otherwise prey on geese. (Cull means to reduce a species’ population deliberately through hunting). Additionally, hunting, for sport or food, is not permitted in most suburban areas, providing geese with a large safe haven in the ‘burbs.

The birds are now found in such high numbers that many consider them pests. There exists a whole industry that offers to keep geese from golf courses, corporate campuses, public parks and airports. Some use border collies that harass the geese enough that they will not stay in an area. Others have machines that make noise to scare the geese and keep them away.

There is a simple way to keep geese away from some areas: plant tall vegetation. Seriously. Geese will not be comfortable in a pond that is ringed with tall grasses or shrubs – there are too many places where predators can hide. Similarly, by maintaining more tall vegetation in a golf course’s “rough,” geese will choose to spend their time elsewhere.

Personally, I like Canada geese – they mate for life and the parents work together to raise their young. And I appreciate their hardiness. About a Century ago, the Canada goose appeared headed for extinction due to hunting and habitat loss. After conservation efforts began in the 1960’s, they rebounded. Then, as more suburban development occurred, their population exploded, thanks in large part to open water detention ponds and mowed lawns.

It seems ironic that humans provide the ideal conditions for the geese to thrive, and then complain that there are too many of them.