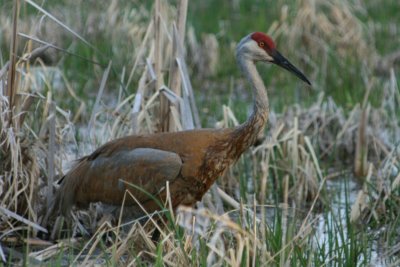 Assessment that recommends a location, configuration and habitat focus for the refuge.

There will be two public meetings the first week in April where the public can provide feedback and learn more about the agency’s recommendations.

The project will be located primarily in the north central part of McHenry County, in the area found between Hebron, Richmond and Wonder Lake. The refuge is proposed to have a robust private land component where landowners will be given encouragement and assistance to manage their properties in ways that complement the goals of the refuge.

Nationally, Wildlife Refuges can be economic engines for a region like McHenry County. People visiting a refuge for the day are likely to have lunch in a nearby town, fill up the car with gas, even do a little shopping. When one considers that McHenry County has a gorgeous landscape left by the glaciers, with rolling hills, clean streams, rich wetlands and remnant oak groves, the opportunities are limitless for this to become a regional tourist destination.

And, one of the best things about tourists is that they visit, spend some money, and then return home. Unlike an economy driven by home-building (which we once had), a tourist economy is actually sustainable, as the people whose livelihoods depend on it have a vested interest in maintaining the surrounding landscape & community character that makes the area so appealing!

So, I for one am very excited about the opportunity that a Federal Wildlife Refuge brings to our area. I hope that others will join me in embracing this addition to our community!