Welcome to Blog #1 of TLC’s 2022 Conservation Leader Internship Program! This first week’s blog is brought to you by Kristi, CLIP’s Crew Leader for the 2022 season. I am stoked to be back and excited to share my knowledge with this year’s cohort of interns! Our first day on Wednesday started off with the usual introductions, tours and paperwork. Afterward, the CLIPsters headed outside for their first team-building activity, which entailed building a house of materials found in the pine woods. Thanks to an abundance of supplies outdoors, a house fit for the TLC cats was built in no time. Next, interns were introduced to Collector, a GIS app, and familiarized themselves with the technology by learning how to plot and label points, polygons, and find TLC sites on the app.

We then quickly headed off to tour some trademark TLC sites to get a feel for what we would be working with. First, we made a quick stop at Apple Creek and snapped some pictures in front of the prairie strip. Here, the interns learned about and collected samples of sweet clover (Melilotus officinalis), an invasive species that terrorizes lots of TLC sites. We also covered some quickly emerging prairie plants, including white wild indigo (Baptisia alba), Golden Alexander (Zizia aurea), and the Silphium family, specifically Silphium terebinthinaceum, or prairie dock.

Next, we headed to Wolf Oak Woods, where we gathered some more invasives to put in plant ID books, including garlic mustard (Alliaria petiolata), honeysuckle (Lonicera maackii), and buckthorn (Rhamnus cathartica). After lunch and another icebreaker activity, we headed off to arguably one of TLC’s most beautiful sites, Spring Hollow. Unfortunately, some nasty invasives such as Dame’s rocket (Hesperis matronalis) and garlic mustard had sneakily crept their way into the high quality woodland, convincing us to stop and pull them out before we continued on our tour of the site. After exploring the rest of Spring Hollow, we ventured off to Yonder Prairie, where we collected some more invasives, such as the aggressive Celastrus vine, mullein (Verbascum thapsus), and both invasive (Multiflora) and native roses. Our successful first day ended with plenty of additions to the interns’ plant notebooks and our first journal entries.

Thursday morning, Lisa, TLC’s Executive Director, explained the ways in which TLC preserves land in McHenry County. The interns learned about the differences between the ways easements can come to fruition, and how TLC works with landowners to preserve the land on those easements. The rest of the morning brought the interns’ first workday, where we fearlessly battled honeysuckle, buckthorn and a particularly nasty bit of Celastrus. In fact, after the Celastrus was pulled away, a giant cluster of native species was revealed underneath, including mayapple (Podophyllum peltatum) and a variety of ferns. After lunch, we pulled Dame’s rocket and garlic mustard around the site, successfully putting a stop to their quest to overtake native woodland species that would have naturally thrived in the area, such as great Angelica (Angelica atropurpurea), whose large, white umbels sit atop dark purple stems that tower nearly 9 feet above the sea of goldenrod that coats the ground below. This task was made difficult, though, by the copious amounts of pollen in the air, which had us all sneezing and coughing. However, we all made it through in one piece. We ended the day off with a quick lesson from TLC Restoration Ecologist David Ducci on how to mix oil and gas for a 2 cycle engine, and added a couple more plants to the ID books before heading home for the day. 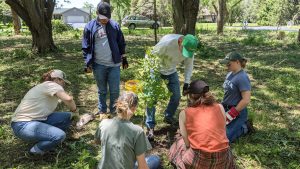 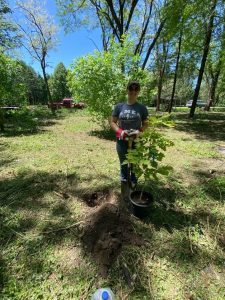 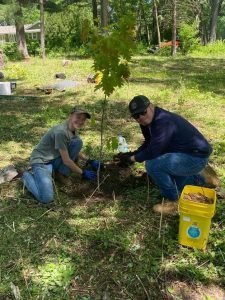 Friday, the interns participated in their first Project Quercus tree planting with Dave Zeiger, retired science teacher and part time TLC staff. In the morning, we did our best to clear the site of honeysuckle and any other invasive species that could have choked out the baby oak trees. During lunch, Kim and David stayed back to further eradicate the honeysuckle, while the interns and I headed over to Dave’s for lunch. Thanks to Dave’s generous hospitality, we learned about the history of oaks in McHenry County, and how important they are to restoring native ecosystems. In the 1800s, oaks were one of the dominating species of the region, keeping a balance in the ecosystem. Now, a very small percentage of remnant oaks remain, which is why planting young oaks is such an incredibly important part of habitat restoration in McHenry County. 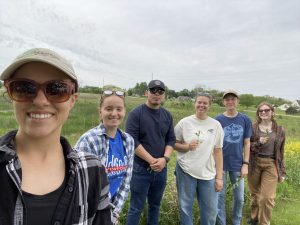 After lunch, the interns took a quick tour of Dave’s native plant garden, while I fangirled over a surprise plant in the garden, prairie smoke (Geum triflorum), a native wildflower that has a distinct feathery pink look. Finally, we headed back to the site and started planting the oaks! After a quick tutorial from Dave, the interns successfully planted seven young oak trees in a region previously dominated by honeysuckle. It was quite heartwarming to see multiple stages of ecological restoration – removal of invasives AND reintroduction of natives – happen in the span of a couple of hours. After a successful day, we headed back to Hennen headquarters and tested out our new backpack sprayers, which we will be using quite a bit this summer. All in all, it was a great day and a successful first week of CLIP!