Have flooding? Use native plants!

We’ve all seen the pictures: muddy floodwaters creeping to the doorsteps of homes around the country. 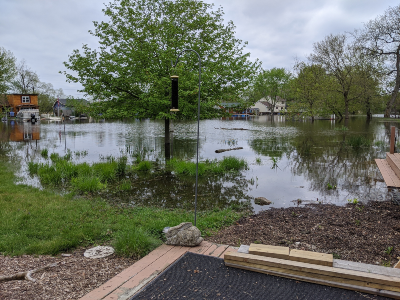 Fox River flooding for one month in May 2020, covering the Thelins’ sedge meadow.

As global warming leads to increasing rain events in the Midwest, this scene is becoming more familiar. One homeowner has taken a proactive approach: native plants.

Meet Jody and Ron Thelin, who live along the Fox River in Port Barrington. When they moved into their one-acre riverfront property in 2017, Jody knew she wanted to cut down on the large amount of lawn grass. They had just moved from a neighborhood with a nine-acre prairie, and her interest had been piqued by native plants. Little did Jody know that her decision to convert to native plants would end up being a blessing in disguise. 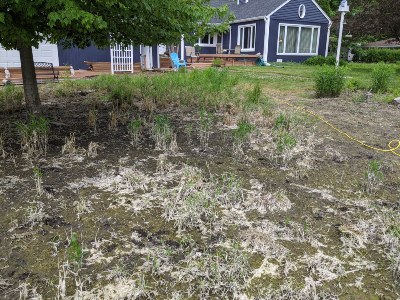 River silt after flooding in the spring of 2020.

The Thelins hired Tallgrass Restoration to help with the process, and a few months after beginning the initial steps, a massive flood occurred in July 2017, with some areas ending up under 3-1/2 feet of river water. The following fall, two sections of native plants were seeded in, including a native “wet prairie” containing plants that thrive in sunny, wet areas. Three years later, it has been flooded 18 times, and these plants continue to thrive. When their property became [email protected] certified through TLC in April 2019, the wet prairie was filling up with rain water! This spring it was submerged under water for a full month. One month later, everything was flourishing. Native plants are hardy, and many are used to living in environments that experience extremes in moisture. Jody’s favorite native plants are sedges, whose dense root systems hold soil in place and help water soak in like a sponge. 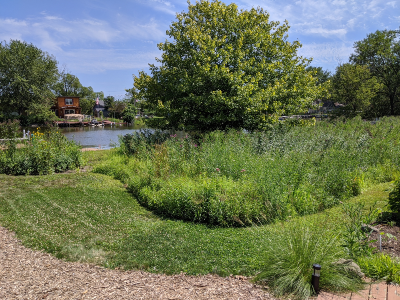 The Thelins’ July 2020 sedge meadow, undeterred by previous flooding, in its third year of growth from seed

Jody knows that she isn’t going to stop the flooding of the mighty Fox River, so she’s found a way to work with it. Jody was so concerned that she took on the role of waterway commissioner for Port Barrington and worked with others to secure grants for native shoreline plantings and a bioswale. 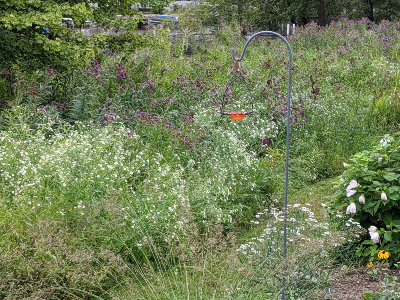 For maintenance on the Thelin property, they controlled the weeds diligently the first year, and the need for weeding diminishes each year. One tip Jody has is to spend time learning your weeds. She is unable to burn, so this March, they mowed her planting down with a string trimmer, which worked wonderfully. This type of maintenance is minimal, much less compared to the chore of maintaining an acre of turf grass in a flood zone. Instead, they can enjoy watching the wildlife and the beautiful view of the mighty Fox River.