How Long is Forever? 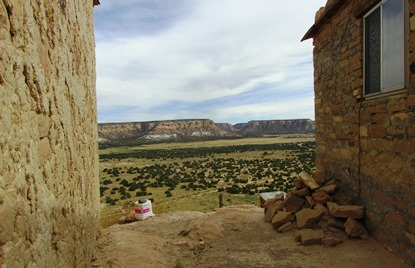 A friend of mine in New Mexico is descended from a Spanish family that has been in Albuquerque since 1593. His ancestors were among the first settlers given land grants by the church when Spain first settled that area. Wow. Four hundred and twenty-one years ago. Nearly 200 years before the United States was founded.

And, as long ago as that all seems from 2014, there is a city in New Mexico that has been inhabited by Native Americans since about 1200 AD. Old Acoma (Sky City) sits on the top of a 365 foot tall mesa, and while only 15 or so people live there year-round today, the Pueblo was home to hundreds of people for hundreds of years. (The photo was taken from the Acoma Sky City).

But, even 800 years is a drop in the bucket in comparison to forever.

There’s an oak tree at Gateway Park in Harvard that is at least 400 years old. That oak was possibly there when my friend’s family settled in New Mexico! I wonder how many oaks were there on the property in 1593 when that one first sprouted. How many 100s of years had oak trees grown on that land? 500? 5,000?

And what about the wetland at Gateway Park? How many hundreds or thousands of years was it filled with swamp milkweed, sedges, bullrushes and all of the insects, birds and other wildlife that are coming back to the area now. The rich, deep, organic soils indicate that they were formed over thousands of years of plant growth and decay in a wet environment. Those kinds of soils don’t develop rapidly.

You get the gist. Do we measure forever based on our lifetimes? An oak’s lifetime? The length of time it takes soil to form? The “life” of a Country?
I’ve never visited them, but I know that some of the Pyramids in Egypt are more than 4,000 years old. A quick Internet search told me that the oldest structure discovered to date is a temple in Turkey that is more than 11,000 years old! Is that forever?

I’m thinking about this because forever is a word that we use a lot when we talk about our work at The Land Conservancy. We promise to preserve land forever – we don’t say we’ll preserve it for 100 years, 1,000 years, or 11,000 years, but forever.

Synonyms for forever include everlasting, infinity, and “until the end of time.” The dictionary definition includes the phrases “without end,” “for a very long time” and “incessantly.”

Well, I don’t know what you think, but I could probably go on and on about forever until I’m blue in the face, but all things considered, it might be better to wait until the cows come home. Just don’t wait until hell freezes over – that would really feel like eternity!