How old is that oak? 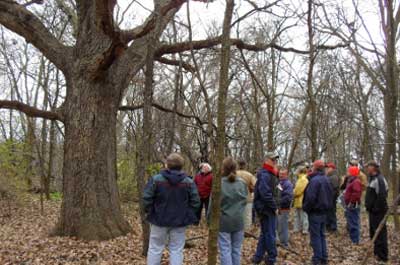 When we say that we found an oak that is at least 400 years old, what do we base that conclusion on? Obviously, we would have to cut the tree down to count the rings, and unless it is already dead, we aren’t going to do that!

The short answer is that we look the size up on a table that Marlin Bowles at the Morton Arboretum created to help people estimate the age of various trees based on the tree’s diameter at breast height (dbh):

The table was created using actual data from a large number of trees that were “aged” either after death or by using a coring tool that allows one to take a small core from the tree so that the rings can be counted without cutting the tree down. The various ages for the various diameters of the various species of trees were analyzed and a table showing the approximate age for different diameters of different species was created.

One important thing to notice, however, is that the table stops at 39” dbh. So, for the really large trees – like the 54 ½” white oak at Gateway Park or the 48” bur oak at Hennen Conservation Area, one has to extrapolate.

In the case of the 54½” white oak, we look at the table that tells us a 39” white oak is about 298 years old. Our specimen is 40% larger than that, which would mean 417 years old if it grew in diameter at the same rate when it was 300 as it did when it was much younger. To be a little conservative, we say the tree could be 400 years old.

We won’t be able to say for sure until the tree is dead. In the meantime, let’s not argue over a few years one way or the other!