Human Nature as Seen Through Landfills 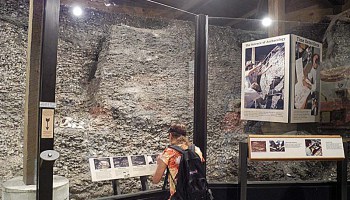 Have you ever heard of middens? They are basically really old landfills.

The word comes from an old Scandinavian word, moedding, which means an old dump for human domestic waste.

People have always produced waste. That is why we know most of what we know about ancient cultures that did not have a written language.

I saw my first midden last month in Florida – a “shell midden” created by residents about 5,000 years ago in a place in Sarasota known as Spanish Point. The top photo shows a cross-section of the midden in the interpretive center.

The native people who created the middens had practical reasons for mounding the shells and other waste material – it created higher land that was less prone to flooding. After all, there was plenty of land in the area, but high and dry ground on the coast was in short supply.

It still is – unless you are in a high rise building. If you don’t already know, Florida is so flat that it makes Central Illinois look practically mountainous. In fact, from one end of the state to the other, there is an elevation change of just 100 feet. For comparison, the elevation change from downtown McHenry to the Woodstock Square is 180 feet!

So, back to middens. At Spanish Point, a midden has been partly excavated by archaeologists to learn about the people who created it. A cross-section of the midden is on display in a small interpretive center at the park.

Shell middens are especially helpful for archaeologists because they are alkaline in character (as opposed to acidic) due to the high levels of calcium carbonate in the shells. An alkaline environment slows the normal rate of decay, leaving a higher than expected amount of organic material remains even after thousands of years have passed.

The people who lived on the west coast of Florida 1,000-5,000 years ago started out as a hunter-gatherer society and eventually transitioned to a subsistence culture with – apparently – a permanent settlement. There were structures, burial mounds, evidence of rituals and a variety of tools.

I wonder what people in the future will think if they decide to excavate our landfills rather than just read our written history? What will our garbage say about us?

Will they build interpretive centers that show a cross-section of a 20th Century landfill? Imagine a display showing the advent of disposable diapers, lean economic times when fewer metals were thrown away, or better economic times when annual layers were thicker.

How much food waste will they find, and will they be able to eat the twinkies they find in there?