Hummingbirds are on the move! 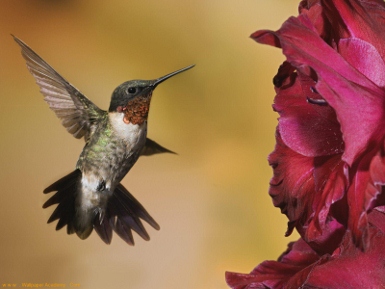 While on the phone with a friend the other day, I spied a hummingbird at the feeder by my window. “Wow, that’s a fat hummingbird,” I exclaimed. He pointed out that this is the time of year when the tiny birds start to bulk up for their fall migration to Central America. Good thing I refreshed the nectar earlier in the week.

Hummingbirds literally double their weight before they head south. To put that in perspective, for most of the year, they weigh as much as a dime. So, that bulky hummingbird I saw might have weighed as much as two dimes!

There is only one species of hummingbird seen in this area, the ruby-throated. They start to arrive in our area in mid-April, spend the spring and summer courting, nesting, and raising their young. The hummers depart in early fall as the flowers they visit for nectar finish blooming. In their travels south, hummingbirds follow the end of the season for their preferred food plants, until they reach their winter homes.

There are at least 150 flowering plants in North America that depend upon hummingbirds for pollination. Most of these flowers occur in the birds’ winter range and in the western US where some hummingbirds are resident year-round due to the mild climate.

Plant species whose names one may recognize such as salvia, monarda (bee balm) and penstemon are all good hummingbird attractors. The blooms of the plants that draw the hummers tend to be red, with long, tubular flowers that favor the bird’s long, slender beak. These lengthy narrow flowers exclude other pollinators such as bees, making the plants and birds particularly interdependent. Perhaps for that reason, the hummer-dependent flowers typically have ample and highly concentrated nectar. Could it be a sweet reward for the birds’ loyalty?

It is particularly important to maintain hummingbird feeders with fresh nectar during the time of migration. The feeders help ensure that the birds will find the food necessary to bulk up for the long trip even if there is a shortage of suitable flowers. Don’t worry that the feeder may cause the birds to delay their migration – they know when it’s time to move on. Hummingbirds migrate south in response to hormonal changes that occur as the amount of daylight shrinks. The availability of food is not a factor. And just think, that nectar-filled hummingbird feeder may make the difference for birds that cannot find enough suitable flowers as they pass through the neighborhood.

Individuals can make a big difference for these lovely creatures by putting out a hummingbird feeder now, and keeping it out for at least two weeks after the last hummingbird is spotted at that feeder. It may seem like the birds barely sip the nectar, but when you weigh as much as a couple of dimes, that sip makes a big difference!

American poet Emily Dickinson wrote several poems about the ruby-throats she saw in her yard, managing to capture the delicate, graceful and colorful movement of these tiny creatures:

And one will surely forgive Ms. Dickinson the near rhyme as she goes on to capture the image of an exotic visitor as it moves easily from bloom to bloom.

“And every Blossom on the Bush
Adjusts its tumbled Head —
The mail from Tunis, probably,
An easy Morning’s Ride –“

More information about these tiny migrants can be found at hummingbirdworld.com and www.hummingbirds.net.