Into the Open Arms of Nature: A Roundup of CLIP Week 5

Last week we were welcomed into the open arms of the mullen, valerian and wild parsnip, as well as a few other pests that have taken root at Irish Oaks Nature Preserve in Harvard. Accompanied by site steward Margee Pieper, we wrestled with the aggressive plants. Despite the fact that we were supposed to be the ones doing the pulling, the mullen got its (still rather pitiful) revenge as we left for lunch with sore muscles along with our soaked and slippery gloves made so purely from the plant’s innards. We piled it all together, ready to be burned. On our way out, we bid farewell to an expansive array of swallowtail caterpillars at their various stages of life. They were munching on a well prepared meal; a pile of parsnip that had been pulled earlier. 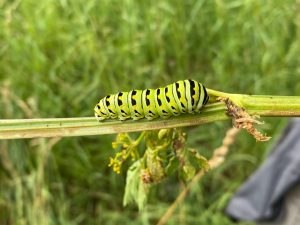 Upon our return to Hennen Conservation Area in Woodstock, we worked on a fen project – an article that will be in The Lakewood Life magazine, encouraging people to notice and appreciate the Kishwaukee Fen that they are neighbors to as well as help city officials see its importance.

Finally, before we left, we checked in on Spock, one of the TLC cats. Earlier we had noticed two mysterious small holes in his side along with some missing fur. Did he show any pain, though? Nay! He strutted his plump little body around and flopped on his side in a dramatic fashion. Thus, never fear, good audience, we sport a true champ here at TLC, if not a bit of a showoff. As this week would show, it had no affect on him whatsoever.

Tuesday came and off we went to Glacial Park. Sarah Michehl, TLC’s community engagement specialist, was there to teach us the rich history of the gorgeous landscape before us. We walked through the prairie to look over the wetlands that we would soon visit. She explained a little of her experience in ecology before walking down a path riddled with different glacial till as the land’s current form relied heavily on the impacts of the Ice Age. We walked on the kames, mounds of sediment formed and dropped off from the glaciers, and saw high above the landscape. It was beautiful. Back by the shelter, we talked about different career paths and about Sarah’s own experiences in college, studying for her love of plants. The end of the day was much less intriguing as we pulled more parsnip and sweet clover at Prairie Ridge. 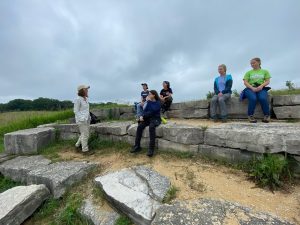 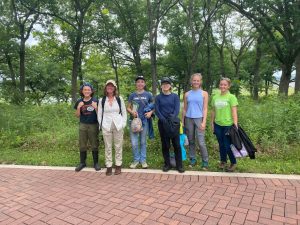 A visit to Glacial Park in McHenry County 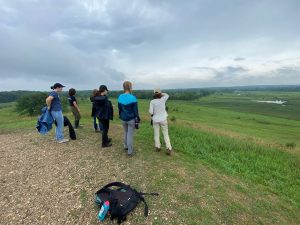 Windy Knolls blew in on Wednesday, giving us a bounty of reed canary grass and parsnip. While out in the depth of the patch of prairie, we walked and talked about the plants we spotted. This included pale purple coneflower, dogbane, and some from the goldenrod family. We pulled mullen in another patch, and after lunch we started our expedition into the inner portions of it. On our way through we saw catnip and mountain mint, and halfway into a sedge meadow, we took refuge away from the hummocks on large flat rocks. Finally on high flat ground, we looked to the wall of honeysuckle before us, knowing that there was a lot of work to be done on the other side. And indeed we were right–a large patch of parsnip and white sweet clover had taken root. Our efficient team had it managed in no time. After we finished, we went on to Wolf Oak Woods where we walked along the road, beheading the teasel as clouds rolled in overhead. We continued on and really, it was quite satisfying. That is, until I made the mistake of grabbing one of the heads without my gloves on. Youch! Just as we finished we felt it begin to sprinkle, then pick up a little, and we knew that was our cue to get moving. 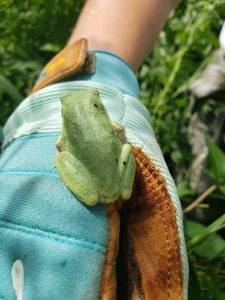 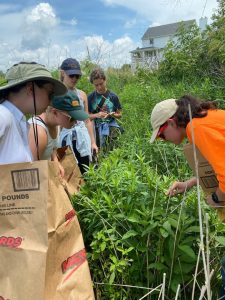 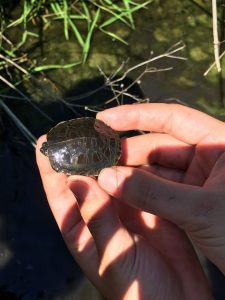 Thursday rolled in with a volunteer work day at Tryon Oaks Woods. We spent our time clearing through the vines and brush and hauling it to the fire. One of the volunteers retired, and not to name names but this person is, dare I say, the King of Kindling! Of course, we all celebrated and wished him luck. Around noon we began the dangerous task of battling the treacherous parsnip. As this continued, I went with David Ducci to build a bridge to a parsnip island, cutoff and inaccessible to mowers and the ATV by two winding creeks that joined nearby. With the rest of the CLIP team working hard close by, we got most of it done. We finished the day by wrapping up the fen article.

Friday began with an interesting soil talk from David Brandt, who was accompanied by fellow interns from the Environmental Defenders of McHenry County. We learned a lot, including that there are two different kinds of soil; organic and mineral. One is made from dead organisms and the other is made from sand, silt and clay. Did you know that if a grain of sand was the size of a basketball, silt would be the size of a pea, and clay the head of a pin? Well neither did I! In fact, their sizes affect how well the soil drains. So if there’s more sand and silt on the top than silt and clay, it’ll drain better, which is more suitable for a house. Afterward, we went to a fen at Trout Valley. A nearby creek had been turned into a series of ponds, all planned by Jens Jensen, a landscape designer during the Roaring Twenties. Afterward we got to see an example of [email protected] done very well with a diverse range of natives and near-natives like the paw paw, which is native a little more south of here. Overall, Friday was a much more laid back day than usual but we sure didn’t mind.

I think I speak for my fellow interns when I say this week was very educational. Meeting so many different people and learning about the many forms wildlife conservation and ecology can take was really helpful in broadening our interest in the environment, and I’d like to thank everyone that was a part of it.