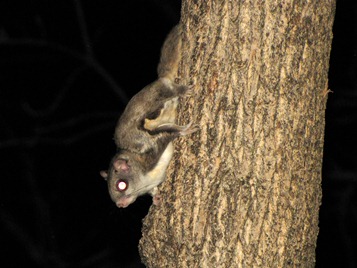 Personally, I am fond of squirrels, and I actually feel bad that my squirrel-proof feeder works so well that I only need to add seed every third day now that the squirrels have given up. (I now put seed on the ground for the squirrels.)

The wide-eyed critter shown here is a flying squirrel that was spotted in a Woodstock backyard over by TLC’s Yonder Prairie. He (or she) has been raiding birdfeeders at night for some time now, and the patient homeowner eventually was able to catch the culprit on film! The flying squirrel is mainly nocturnal, so it is uncommon for people to see them.

This little guy’s cousin, the well-known grey squirrel, doesn’t sneak around – he’s right in the open, shamelssly cleaning out birdfeeders in plain sight.

In defense of squirrels, and in support of Squirrel Week, I thought I’d share some facts about squirrels. If you alreaady love them, you’ll have some tid-bits to impress your friends. And, if you are not fond of them, maybe some fact on the list will get you to reconsider your dislike – or at least help you to dislike them less…

– The grey squirrel is a member of the family Sciuridae, which includes marmots (hedgehogs), prairie dogs, chipmunks, ground squirrels and flying squirrels.

– The oldest known member of the Sciuridae family dates back nearly 40 million years based on fossil records.

– There are 285 known species of Sciuridae on the planet, and they are native to North and South America, Asia, Africa and Europe.

– Squirrels (and their kin) are found in habitats that range from bitterly cold regions to dry, hot deserts.

– Squirrels become fertile at about age 1, and will produce 1-2 litters a year. The young are born after 3-6 weeks gestation, and are mature enough to leave “home” after 6-10 weeks depending upon the species. Newborn squirrels are said to look like unshelled circus peanuts with little legs. And just in case you are having a hard time visualizing them, here’s a picture for you.

One of the reasons squirrels inspire so much resentment and anger is that they are not content to just stop by one’s birdfeeder for a snack when they are hungry. No, the typical squirrel will stay at a feeder and eat until all the seed is gone.

Further, they are agile and persistent, which means they will stick at the problem of getting to the desired seed no matter what obstacles are placed in their way. Here is a cute video of an obstacle course that someone set up for a squirrel that gives you an idea of what they will do for a dish of nuts.

My final thought in defense of the humble grey squirrel and his kin is this: if more people approached the obstacles and challenges in their lives with the tenacity and creativity of a squirrel, there would be no problem we could not overcome!