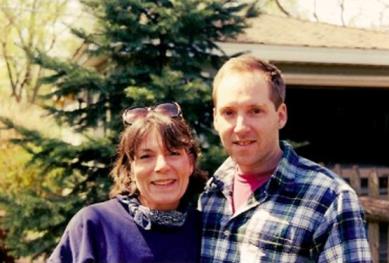 In July of 2013, TLC accepted a donation from Mark Burhoe of 13 acres of land located in unincorporated McHenry Township. Part of the donation agreement allowed Mark to name the site. He named it after his mother. What made this city kid want to buy land out in the country? Here is Mark’s story…

My late mother, Lynda Clayton (1941 – 2007), was a great lover of nature and extremely compassionate toward all animals.  She’d regularly take my brothers and I on long walks in the Isaak Walton and Sand Ridge Preserves in the South suburbs of Chicago, which helped to instill in us a love of nature.  Her front and back yards were so full of trees and bushes, (each carefully chosen) that you could hardly see the house.  She’d always take in stray cats and feed possums and raccoons that would visit the back yard.  Aside from feeding it, she believed in letting nature alone, and would sometimes write letters urging that some nearby planned development be canceled and the landscape be left in its natural state.   Sadly, she died too young in 2007 of ovarian cancer.  This land is a home to many wonderful plants, trees, and animals, and I know that she would be proud to be part of saving it from an uncertain fate.

How did I come to purchase this land?

A couple of years ago I decided to look for some land to buy, ostensibly as an investment I suppose, but primarily because I thought it would be cool to have a piece of nature of my own to enjoy, study, and protect, not too far from where I lived in Chicago.  I was looking for a parcel with a lot of diverse landscape and habitat, and when I came across this land for sale on Landwatch.com I did a walk through and I was intrigued, though it was a bit out of my price range at the time.  I continued my search for a couple more months and saw a lot of parcels, but the Windy Prairies land stuck in the back of my mind.  Then the sales realtor, Dail Cook, emailed me that the price had been reduced significantly.  I came back for another look, and decided it was just what I was looking for and took the plunge, despite it having had a somewhat complex and troubled past (but that’s a long story). Actually, I was strongly advised against the purchase by my real estate lawyer and several other members of my family.   I had to admit that “on paper” it looked like a boondoggle, but a couple of my close friends saw what I saw in it, which helped bolster my resolve.

How did the donation come about? 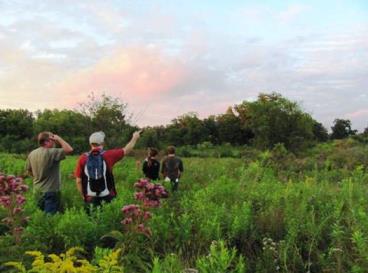 When I started learning about land management (yes, I started learning after buying the land), I realized that I couldn’t responsibly manage such an extent of wetlands myself.  I needed to bring in people with experience and expertise.  My realtor Dail had introduced me to one of the local residents, Pat Sullivan-Schroyer, who was very helpful in getting my bearings in the neighborhood.  She and her husband are conservationists themselves and they introduced me to Linda Balek at The Land Conservancy.  After meeting with Linda and other T.L.C. people, I felt comfortable that they were an organization that I could trust to be caretakers of land that I’d decided to attach my mom’s name to.  I’m hoping that the Lynda Clayton Preserve can become something that the neighborhood feels belongs to them, and can be a source of rejuvenation and inspiration like the neighborhood preserves I was lucky enough to live near when I was a kid.

I live in Chicago with my wife Sandra and dog Tuffy.  Over the years I’ve worked in medical radiation physics and taught English as a Second Language for non-profit organizations.  I’m currently doing some tutoring and volunteer teaching and looking to get more into science education.

From TLC – Why we chose to accept this donation:

This piece adds to the mosaic of protected lands that run along Dutch Creek, from Windy Prairie Acres at the north end, all the way south to Johnsburg Road, just before it meets the Fox River. This area of protection along Dutch Creek consists of privately owned conservation easements held by The Land Conservancy and MCCD, in addition to land owned by the Village of Johnsburg and MCCD. The newly donated land is a critical piece in this patchwork of protection because it contains the headwaters seeps, springs and wetlands from which Dutch Creek originates. By protecting the headwaters, we help to preserve and improve the biologic integrity of what happens downstream.