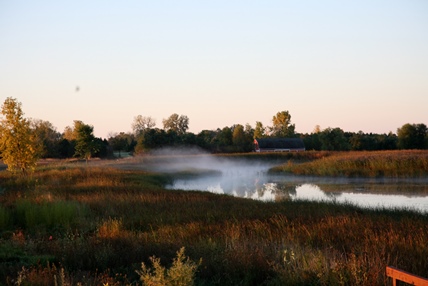 “Soulful Prairies became a white canvas and our palette was loaded with color. We researched, dreamed and schemed to create a beautiful place with sustainability, restoration and salvage in mind. Each step  has brought growth and change. As we restore the land there is a sense of renewal that we wish nothing more than to share with others.” Linda Bruce

On New Year’s Eve, 2013, Linda and Robert Bruce signed a conservation easement with The Land Conservancy, protecting 34 acres of their 80-acre property north of Woodstock.

For those of you who have lived in McHenry County a while, you may have driven past the Bruce property on Alden Road, once known as “Country Cabin Orchard.” It featured a pick-your-own apple orchard, pumpkin patch, Christmas tree farm, pony rides, and much more. The business fell on hard times and by the mid 2000s it went into foreclosure.

Although most locals knew the property as “Country Cabin,” a few others knew it as something else. For many years, bird watchers, botanists and nature lovers studied and observed it for its rare birds and plants.

In 1990, the U.S. Fish and Wildlife Service worked with the owner to create a shallow marsh to serve as waterfowl habitat. The marsh attracted a great diversity of wildlife, including birds of concern, such as the yellow-headed blackbird and the least bittern. Another part of the property remained relatively untouched. This area was known to botanists for the unique plants that were still there because the land had never been plowed or grazed. Plants including prairie smoke, little bluestem, Indian plantain, swamp saxifrage, Turk’s cap lily and bottle gentian were all there, to the amazement of the few people who knew about this patch of living history.

By the time Linda and Robert bought the property in 2009, the natural wonders were losing ground due to years of neglect. Buckthorn and other invasive species were taking over the remnant prairie, and the water control structure installed by the U.S. Fish & Wildlife Service broke down, making it impossible to control the water level of the marsh.

The Bruces didn’t waste any time. After they acquired the land, they started removing the dilapidated buildings, cleaning up garbage and restoring the land to its natural state. They hired McConnell Environmental to begin ecological restoration, beginning with brush removal, native seeding and controlled burning. The wildflowers, like prairie smoke, that were becoming hard to find under all the buckthorn started thriving again. Who knows what other native plants will emerge with continued restoration?

Linda Bruce contacted The Land Conservancy in 2012 with the idea of protecting at least a portion of the property so that it would be preserved. TLC put Linda in touch with the U.S. Fish & Wildlife Service, and the agency was so confident in the new owners, and their desire to donate a permanent conservation easement to TLC,that they provided grant funds and technical assistance to repair the water control structure.

The conservation easement was placed over two areas of the 80-acre property; nineteen acres of marsh and fifteen acres of prairie/wetland are now permanently preserved, thanks to the Linda and Robert!

Learn more about Linda’s vision at the Soulful Prairies website.