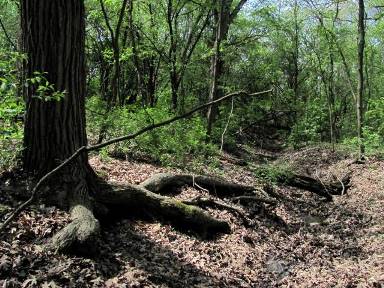 The Big Woods of McHenry County once extended from Marengo to Alden, straddling the steep topography of the Marengo Ridge. Today only scattered remnants of that woodland survive, with most of those blocks less than twenty acres in size. The opportunity to preserve a nearly one hundred acre stand of oaks

is rare and the potential to study their ecosystem components in a large block equally unusual.

As of July 16, 2013 one of these stands is now protected and will be known for perpetuity as The McHenry County Community Research Forest. This project was made possible through a creative partnership forged between a local nonprofit: The Land Conservancy of McHenry County (TLC); a private landowner; a government agency: the McHenry County Conservation District (MCCD); and a grant from Illinois Clean Energy Community Foundation.

The Community Research Forest includes three parcels of land located just southwest of Harvard that together total 93 acres. Two of the parcels (about 53 acres) were purchased outright by the Conservation District funded in large part by a grant from the Illinois Clean Energy Community Foundation. Also included is a 40 acre conservation easement donated to TLC by local resident Al Van Maren, a private landowner and owner of AlsPacas at Dutch Mill Farm.

This effort marks the first joint land preservation project by TLC and MCCD. An effort that grew out of a partnership agreement signed by the two organizations in January 2013.

The Community Research Forest will be divided into small management units with different practices used to accomplish restoration goals over many years. The results will be studied and documented and then used to advance the region’s understanding of oak ecosystems and their long-term care.

TLC is particularly excited about the project, says executive director, Lisa Haderlein: “The Community Forest includes a strong private land component that we hope will be useful to the many landowners who own the majority of the remaining oak woods in the county. If oaks are to be a part of the local landscape a century from now, we need to help private landowners take the steps needed to care for the woods that they own today so they continue to serve the community tomorrow.”

Congratulations to the Art of the Land award winners!

Congratulations to the 2021 Art of the Land photo contest winners