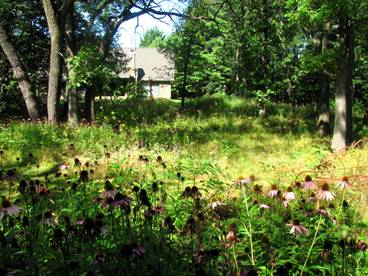 TLC first met Judy Woodson when she invited Oak Keepers to her property in 2008.  It was the first year Oak Keepers began visiting private landowners with remnant oak woodlands.  Judy’s land was one of the first properties visited because it is part of one of the largest intact oak groves in McHenry County.  Five years later, in 2013, the land became preserved forever! 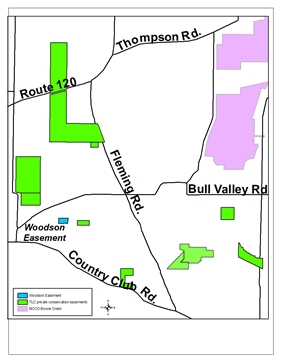 There are only seven stands of oaks remaining in McHenry County that are over 100 acres in size.  One of them, nicknamed Country Club Woods by Oak Keepers, is 115 acres, and Judy’s 3-acre property sits at the far western edge.  Oak Keepers Barb Wilson and Chris Bataldan found red, white and bur oaks, some of them estimated to be over 200 years old.  They found few invasive species and an abundance of native shrubs and wildflowers.  It was evident that this was a special place that was being cared for by a very knowledgeable owner.

In May of 2013, Judy contacted The Land Conservancy, wanting to know how she could preserve her property for the future.  “I only have three acres, is that enough?”

Linda Balek, Land Protection Specialist with TLC, visited Judy and walked the property, taking notes on all of the wildflowers observed along the way.  “Shooting star, white trillium, green dragon, wild yam, maidenhair fern, Jack-in-the-pulpit, culver’s root, wild ginger, bottlebrush grass, columbine, bloodroot, hepatica, I couldn’t write fast enough to keep up with everything I was seeing,” Linda reflected.  “Judy’s enthusiasm was what really made the visit unforgettable.  I felt like we were two kids in a candy store.  She would point to a wildflower, name it and then giggle.  I couldn’t believe all of the diversity on her three acres.  We walked through woodland, savanna and open prairie.”

Judy and Ed Woodson bought the property in the late 1970s and began removing invasive brush.  Some of the natives were there, waiting for a little light so they could flourish.  Others were introduced along the way.  The property has been managed for over thirty years now, and has been burned almost annually for at least the past twenty years.  Oaks and hickories have enough light to reproduce.  Wildlife loves it here.  Hundreds of species of insects, butterflies, birds, wild turkeys, great horned owls and even a pileated woodpecker have inhabited the property.

It is easy to understand why Judy feels that it’s important to preserve this place that her family has put so much work into, and has enjoyed for all these years.