Lots of work, lots of fun and lots of teasel – CLIP week 7

This week was great; we got to get some work done obviously, but there were also some really fun activities and we met a couple new faces.

On Monday (July 11) the day started kind of cloudy but not too gloomy, there was a chance of rain but we weren’t sure just how much. So to begin our morning shortly after our arrival at Hennen we did our customary warmup and then TLC’s Kim Elsenbroek spoke to us about the plan for the morning. The plan was to go to Wolf Oak Woods and herbicide spray some invasives at the site, specifically teasel, as well as cut down some woody invasives with the brush saw. There was a concern, though, that it was going to rain and therefore herbiciding would be done in vain.

Megan, TLC’s restoration ecologist, gave us the green light and so we prepared our herbicide backpacks and went on our way. At Wolf Oak we separated into two teams – one team tackling the teasel and the other removing woody invasives. I was part of the herbiciding team and we didn’t work for very long until it actually started to rain on us. Thankfully though we were still able to get all the teasel, so even though it did end up raining the mission was still successful. Soon after it began to rain we packed our things into the truck and went back to Hennen. 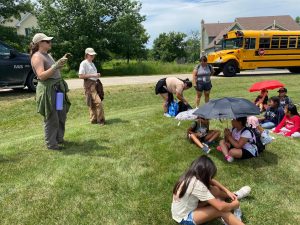 After maybe about an hour or so of rain the skies cleared and the sun shone bright and hot. Now it was time to do something we had been preparing for the last week which was the plant hike at Boloria Meadows with the kids from the Youth and Family Center of McHenry County. We prepared some pretty cool things for the kids like a prairie and woodland plant checklist / scavenger hunt, and a sketchbook to draw their favorite plants at Boloria. The hike was pretty fun; we taught the kids about the difference between native and invasive species, as well as the anatomy of a flowering plant, and we showed them the coolest plants at Boloria like the milkweeds and mountain mint. They learned about the defining characteristics of each plant as well as their overall importance and significance. Although the heat was irritating the kids quite a bit, so the process wasn’t as smooth as it could have been. All in all the hike went quite well and was a great learning experience for the kids and a great teaching experience for us. Overall, Monday was a good day, although with some confusing weather, but we had lots of fun doing another activity with the kids we have been working with since the beginning of the internship. 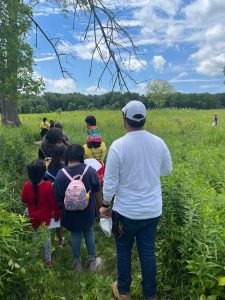 Tuesday was a packed day with two big activities laid out for us, but before we got to those we had to do some regular invasive work in the morning. So our day started off really nice, the weather was great and the temperature was really good and comfortable. Our job for the morning was to do some invasive work at two sites that are new to us; Waichunas and Zoost. There were two things we needed to do; we needed to remove sweet clover by hand and also herbicide teasel and purple loosestrife.

To get going we prepared the herbicide backpacks and packed the other tools like the predators. After everything was all set and ready we left for Waichunas first. There we split into two teams, one for herbicide and the other to pull the invasive sweet clover. I was in the sweet clover team with Amelia and Bree while Casper and Kristi went to herbicide. We then went to work and pulled all of the sweet clover we could spot inside the property line and also removed some surprise crown vetch. There was a good amount of sweet clover but it was relatively easy to remove. So after everything was said and done we left Waichunas and went to Zoost. 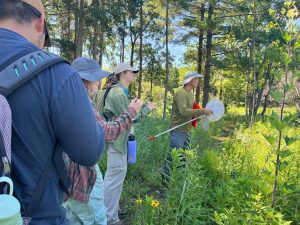 At Zoost, though, we didn’t do any work, we were there only to check for invasives and there weren’t any. Now that the invasive work was done, it was time to go onto the first main activity for the day; butterfly monitoring with Pete Jackson at Boloria. When we got there Pete gave us an introduction on how monitoring works and the process he goes through, as well as a brief lesson on the various species found at Boloria, with the star being the beautiful Monarch. To begin our monitoring Pete gave us a log sheet with the various habitat types at Boloria matched with the list of species so we could log how many of each species we find at each habitat type. Pete took us on his usual route, crossing all habitat types, but unfortunately we didn’t find many butterflies. However, the ones we did see were very beautiful and fascinating. Pete shared a lot of special and fun facts about each of the species we found. 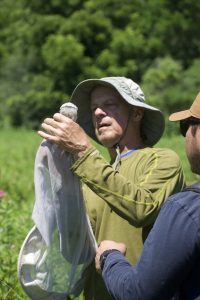 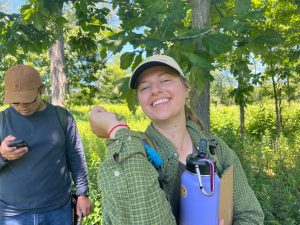 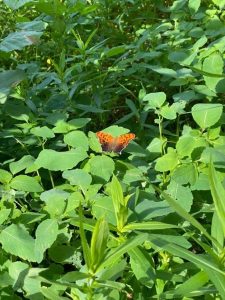 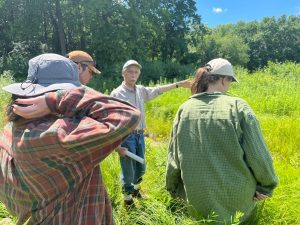 Although we didn’t find many butterflies, the experience itself was great. We finished up at Boloria, said goodbye to Pete and headed to a new location to meet someone new. We were to meet TLC Board Member Ders Anderson at Boger Bog. It was about lunchtime when we arrived, so we ate lunch before we did anything else. As we ate, Ders began telling us the history of Boger Bog in relation to its original owner. The name of the original owner escapes me now, but he was a unique man with a background in artistic design. Ders spoke to us about the many things the man had done to spruce up the site with his design work and the many projects we wanted to get done at the site. He was an interesting man, but Ders made it clear that he was very interested in taking care and preserving nature. After our lunch we went on a full tour of Boger Bog that took us pretty much until the end of the day. We traversed a lot of land on the tour and got to see the efforts Ders and his team have gone to conserve and protect the site. Ders shared a lot of his knowledge about the site and the species that reside there as well as the future projects that are planned to further protect the site. Ders is a determined and hardworking man, but also very friendly, as at the end of the day he shared a cup of his homemade iced tea with us. 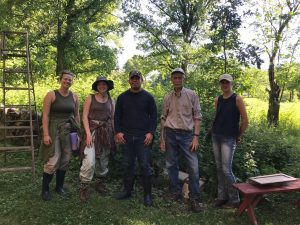 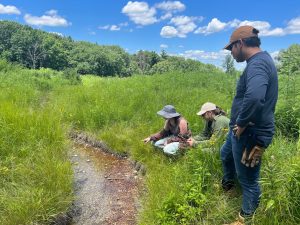 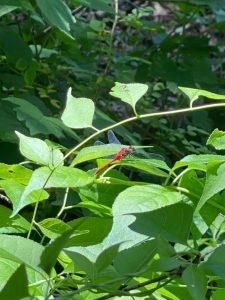 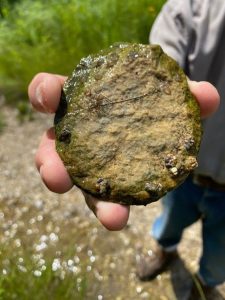 Wednesday was a whole day of invasive and herbicide work at two sites that were new to us–Windy Knoll and Powers Creek. Before we went on our way, we prepared herbicide packs with garlon and milestone for teasel and thistle respectively. We also packed our parsnip bags, predators and brush saw. The two sites arey close to each other but also very different. We worked at Windy Knoll first, with one team on teasel and the other for thistle. There wasn’t much teasel at Windy Knoll but the few patches that we found were of very tall and large teasel, which was somewhat disgusting. After finishing up the teasel Kristi and I went out on an adventure to search for the patch of parsnip that was marked on ArcGIS. It took us a little while to get there because there wasn’t much of a path. In the end we reached the patch and cleaned it up; there was a good amount of parsnip but not something crazy. Lunchtime came about, so we took our break and ate our lunch and then prepared to move on to Powers. We packed all of our stuff and drove down the road to Powers Creek to work on parsnip and thistle. By this time the temperature was pretty high and exhausting, but we kept working as best as we could. Casper and I removed almost all the parsnip around the mowed path and this took us until about 3:00 p.m. Time flew at Powers and the end of the day came quickly; there was a lot of work to do at the site, so that helped. Afterward we went back to Hennen, we journaled and went home.

On Thursday we went back to Irish Oaks to work on parsnip and garden valerian as well as to herbicide birds foot trefoil. Before going to Irish we prepared the Roundup herbicide packs and also gathered our other invasive tools for parsnip. There, once again, we split into two work teams; one herbicide and the other parsnip. Casper and I received the honors of working on the parsnip and garden valerian and we worked on both sides of the creek at the site. There was a significant amount of parsnip all around where we were working, which took us until lunchtime to finish up. Later we saw that two people arrived – tree specialists from Davey Tree Company. They were there to give us a quick lesson on forests pests. They spoke to us about the various pests that plague the region and how they affect the overall ecosystem. They also explained how they try to protect trees from these pests, sharing some of their techniques and methods for doing so. After lunch we split up. One team went to Emricson Park in Woodstock and the other to Spring Hollow Nature Preserve. We collected seed until the end pf the day. At Spring Hollow we collected a few different types of seeds; a woodland mix, if you will. It was a great change of pace from all the invasive work for me and so it was a really relaxing experience. The seed collecting took us until the end of the day, then we headed back to Hennen.

Friday was very interesting. We were supposed to be at a workday, but the rain canceled those plans. Because of thecancellation, we had to do something else that was just as important. It was time to begin the report for the herbicide experiment we set up a while ago. We then made an outline of what we wanted to measure to seek correct results, so we decided to measure things like shoot height as well as root length, and other various measurements were taken. We took the opportunity to write something as scientific as possible so we followed the academic lab report outline describing everything we did step by step, as well as everything we used, and also what we measured and how. To create something more scientifically valid, other sources were found from other scientific journals that would help strengthen our initial hypothesis. Our initial hypothesis was that the herbicide would inhibit the germination rate of the seeds we used which were of Rudbeckia triloba. From our observations it seemed pretty accurate, though, that our hypothesis was correct. In our treatment group there was next to no vegetation while the control (which received no herbicide) had a good amount of it. All of these little things we had to account for because it is important to lay out every crook and cranny when it comes to a scientific experiment. This is because a viable experiment must be able to be replicated, so it is very important to explain everything as much as possible. Overall, it was a great final day to another great week, and although we didn’t finish our report, we got a really strong foundation for it and we know where to take it next. We all had a lot of fun this week and certainly learned a few new things about scientific experimentation. 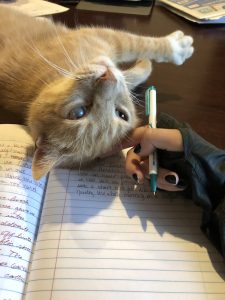