“Green infrastructure” – as opposed to traditional built infrastucture like roads – includes the living systems like wetlands and woodlands that provide essential support to our communities in the form of reduced flooding, improved air quality and enhanced water quality.

The recently unveiled McHenry County Green Infrastructure Plan identifies a network of undeveloped lands that will help ensure the county’s human and natural communities can support one another in perpetuity. The plan includes recommendations for preservation of the existing wetlands, oak woodlands, prairies and streams, use of built green infrastructure like raingardens and green roofs, and the needs of green infrastructure to supports the county’s full diversity of plants and animals. A copy of the plan and maps can be found at www.co.mchenry.il.us/departments/planninganddevelopment/. 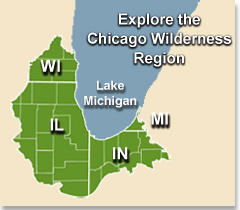 A green infrastructure vision for McHenry County is also included in the Chicago Wilderness Green Infrastructure Vision (CW-GIV), due for release later this month. Chicago Wilderness covers an area that extends from southeast Wisconsin all the way around the southern end of Lake Michigan and into southwestern Michigan. The CW-GIV will be a guide to “creating a region where healthy ecosystems contribute to economic vitality and a high quality of life for all residents” (www.chicagowilderness.org). Additionally, the vision will provide a blueprint for preservation of the region’s biodiversity by focusing conservation efforts on preservation and restoration of the lands and waters necessary for the full diversity of native plants and animals found in the region to thrive.

Back in 1999, Chicago Wilderness, a regional alliance of more than 200 conservation organizations, published a Biodiversity Recovery Plan for the region. It may come as a surprise, but the Chicago Wilderness geographic area is home to an amazing diversity of globally rare plants, animals and natural communities.

That’s right, despite a human population of more than 8 million people, plants like the prairie white-fringed orchid, animals such as the Blanding’s turtle, and natural communities that include fens, bogs and oak savannas all survive on the planet due – at least in part – to conservation efforts in the greater Chicago region.

Part of the ecological success is due to more than 370,000 acres of land that has been preserved by local, state and federal government agencies. However, the vast majority of land in the region is owned by individuals – it always has been and always will be – and the decisions those landowners make to preserve, restore or develop their land will determine the character and environmental health of the region.

When one looks at the portion of Chicago Wilderness that is in Illinois, there is one county that stands out for the remnant natural communities that exist – and natural areas that could be restored: McHenry County.

For those who live here, that fact is no surprise. Local rivers and streams, including the Nippersink and Kishwaukee, are among the highest quality in the entire state. The local oak woods – while greatly diminished from the 1830’s – are the most substantial remaining oak woods in northeastern Illinois. A great diversity of wetlands from sedge meadows to fens and seeps are still found here. Plus, more than half of the land in the county is farmed, so many of the wetland areas that were drained for farming 80 or more years ago are still farmed today, meaning that there is an opportunity to restore those areas someday.

Private landowners have left an amazing legacy in McHenry County – in some cases by accident, in others, by design. The green infrastructure plans articulate a clear vision that all landowners, conservationists, local governments and developers can follow to ensure that the future balance between people and natural resources in McHenry County is not left to chance, but is preserved by design.