Native Americans and the Land 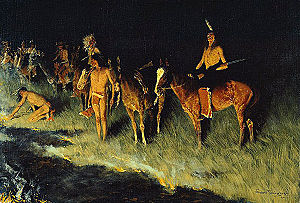 Did you know that native people, for perhaps thousands of years before Europeans arrived on this continent, managed the land to make it more conducive to hunting? They lit fires to keep the brush down in the woods, and to keep the landscape around their encampments open for visibility, and safe from wildfires.

This painting by Frederic Remington, noted painter of the American west in the 1800s, shows Native people watching a grass fire that they set. This would be an image that Remington actually witnessed — he wasn’t one for painting from his imagination — he liked to depict real people and real situations that he witnessed first hand. Kind of like an early newspaper photographer, but with a canvas and paint brushes.

An early settler’s journal describes this place we live in today as looking like “apple orchards planted by the hand of God for the pleasure of man.” The oak woods that early settlers found were open, easy to walk or ride a horse through. Today, one might say they were “park like.”

This open and inviting scene was part natural (through spread of wildfires), but also partly human-made, through the use of controlled fires by Native peoples.

After European settlement of the region, wildfires were eliminated as were human-made fires. This permitted brush and less hardy trees (like maples and ash) to grow unhindered by fire.

The lesson I wanted to pass along is this thing we call “ecological fire” is not exactly new, and the landscape that our forefathers and mothers inherited when they moved to McHenry County was hardly untouched by human hands.

So, once again, the old becomes new, as we relearn the ways that many generations of Native people took for granted. Careful management of the land was good for game, safety and ultimately survival of those peoples.

Relearning these ancient lessons of how to tend the land in ways that promote sustainability for us and for nature can only benefit every member of the community.