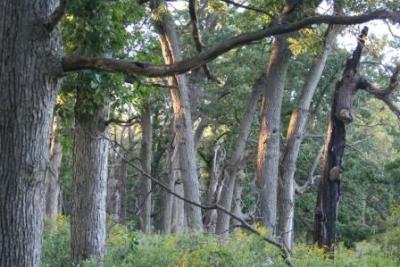 Oaks are tough. But they aren’t invincible.

On my daily commute between Harvard and Woodstock, there are several majestic oaks I’ve admired over the years that are showing signs of decline, and even a few that have been removed in recent months.

The declining trees tend to be close to Route 14, and signs of stress can be seen as upper branches die off, or perhaps the leaves turn brown and fall earlier than other trees.

These veteran trees are 200 or more years old, but if given proper care, one would expect them to live at least another 100 years.

So, why are they dying?

It is rarely one thing that kills an oak. Rather, these distinctive trees often succumb after a combination of stresses wear them out. The usual suspects include:

–    Age. Let’s face it, as any of us age, little things that may have been “no big deal” when we were young can be harder to recover from as we age. The same is true for trees.

–    Changed hydrology. Hydrology is the surface and below-ground flow of water in an area. As roads are built, rebuilt and widened, the flow of water changes, and this affects the trees near to the road. Another way that hydrology is changed is through tiling of farm fields to change the water table levels.

–    Invasive plants. Buckthorn, honeysuckle, maples and other fast-growing trees shade out the lower branches of oaks, causing those branches to die. Groundcover plants like garlic mustard change the soil chemistry, which is believed to affect the fungus and microbe populations in the soil.

–    Damage. Digging a foundation near an oak, building a road, compacting or adding soil underneath or pruning branches during the growing season will damage oaks. The root system of oaks is near to the surface, so compaction will crush roots and adding soil can smother them. Also, an oak’s root system extends at least twice as far from the tree as the canopy, and when the roots are severed, it may not kill the tree, but it is another stress.

–    Disease. Oak wilt has been around for many years, and while it is almost always fatal for red oaks, it rarely kills the white or bur oaks, as they have a natural resistance.  The beetles that spread the disease gain entry to the trees when they are damaged – or pruned – during the growing season.

What can be done to help these trees live out their natural lives?

–    Remove invasive plants by cutting brush and painting the stumps with herbicide to ensure they will not regrow. Pull garlic mustard in the early spring and add seed from native grasses and flowers to help keep it from dominating the understory.

–    Prune oaks between October 15 and March 15 when the trees are dormant. Ideally, hire a certified arborist to remove dead branches every 4-5 years to keep the trees healthy.

By taking care of the oaks, they will provide beauty and enjoyment for many generations.

TLC holds a fall oak sale each year. All trees are grown at a local nursery from locally collected acorns. Thirty percent of proceeds support efforts to plant more oaks throughout McHenry County, and the remainder supports the growing and care of trees that are sold and planted. Click here to place an order by Monday, October 7th, or call the office at 815-337-9502. Trees can be picked up at TLC’s office, 4622 Dean Street, Woodstock on October 11 and 12.