Welcome to Blog #2 of TLC’s internship program. This week it is brought to you by Isaac! He is one of the interns this year, and this week there was a lot of hard work, but also some good amounts of fun. 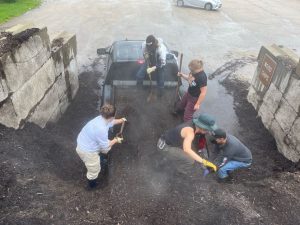 We began on Monday with a bit of rain and work on a pollinator garden. Our first task of the day was to get some mulch for the garden, so we gathered our rain jackets and boots and headed our way to the mulch pile. There we met Pete Jackson, a TLC volunteer and stewardship director at Friends of Hackmatack, who spoke to us about what we were to accomplish, and we quickly got to work. At the bottom of the mulch pile, there was an extensive “lake” of water, so that was fun to deal with. We began shoveling the mulch into the bed of our truck. There were a couple people on top of the mulch pile breaking it up and cascading it to the bottom so it was easier to shovel into the bed. Steam and humidity were our enemies while shoveling the mulch, but we got the job done. In the end we did two trips from the pile to the pollinator garden where we dumped it into another pile so it would be ready to be used another day.

While making the pile next to the garden we got soaked by rain which for me personally was fun and actually pretty calming. After the mulch, we took a very much-needed break from physical work with a tasty lunch and a few minutes of easy computer work, and thankfully what was next wasn’t very intense either. 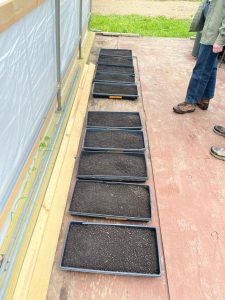 Kim Elsenbroek, TLC’s CLIP director,  spoke to us about an experiment she wanted to conduct – an experiment to test how herbicide affects the germination of seeds. To set up the experiment we first needed soil, and for this we went to a place that appeared to be farmland in the past and is now littered with invasives. We shoveled up our soil from there and then we went back to Hennen. For our experiment we made two groups, one experimental and one control, so one received the herbicide treatment and the other did not. Each had the same soil, same seed and same amount of seeds. We treated each group accordingly and watered the trays with the soil and seed. We were to water the trays every day and make observations on the state of each group as time passes.

Tuesday was very intense but gratifying. The day started quietly but with an interesting topic. We met Dave Holman, who works with GIS (geographic information systems) to map, label and log critical locations for conservation. He gave us a quick introduction about the use of GIS and its modern capabilities as well the many ways he and Kim have used it to map areas significant to TLC.

The next lesson of the day was learning how to use the brush saw properly. We received an overview of the machine as well as how to safely handle it for our good and the good of others. We each gave it a try starting it and holding it, and after we also each practiced sawing. 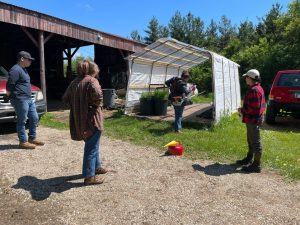 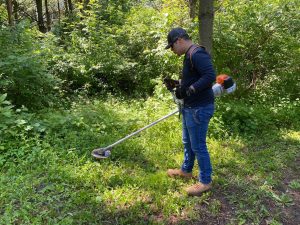 In the afternoon we gathered a few shovels and rakes because it was time to get to work. We headed back to the pollinator garden where we met Jack and Judy Speer of Small Waters Education as well the team of kids of the YFC (Youth and Family Center of McHenry County). The kids were very excited to get started with the garden and there was much to do. We all worked quickly to remove most of the weeds and the trash items lying around. After, we began leveling the ground, which took a little while, but with the help of the kids it was pretty fun. Once the ground was leveled, it was time to begin the final stages of preparation. We laid down sheets of cardboard throughout the garden space and soaked everything with water. By this time the kids were taking a well-deserved break and we were preparing the space to lay down the mulch. The rest of the day we shoveled and carried mulch and another team spread it over the garden space with rakes. The kids resumed work with us and ended up pretty tired from the intense mulch work, but by the end of the day all the mulch was gone and the garden was ready to be planted with beautiful plants.

Wednesday arrived, and the day started with a really nice and calming activity for me – planting some of the loose plants in pots we had at Hennen. We picked quite a few pots of plants, I remember mostly ferns and a few other species. We worked in pairs and began planting near the bench space in the woods at Hennen. It was a relaxing activity for me because it was a peaceful day and handling plants is very soothing and calming. Bree and I planted quite a few plants and was a very nice change of pace from the day before. 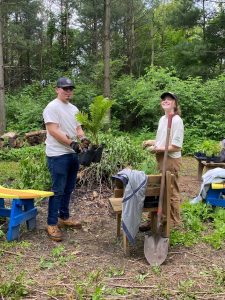 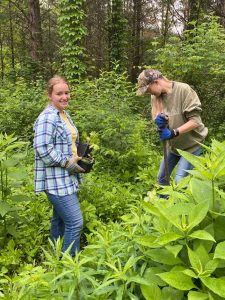 The day took a very rainy turn and our outdoor activities for the day were no more. We spent the rest of the day organizing the TLC office closet. The day was kind of slow, but it was interesting to find all kinds of new and old items, from an adding machine to a first-gen iPad and 10 copies of “A Sand County Almanac”. 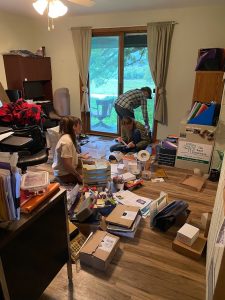 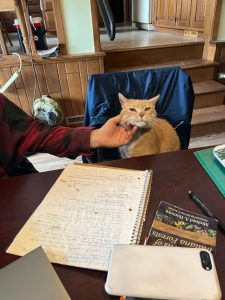 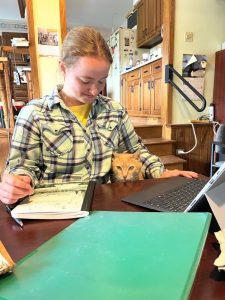 On Thursday a big job awaited us at the pollinator garden – it was third and final day of planting. We began by marking the borders of the garden around the perimeter with white thread and stapling it down so it stays put. After marking the borders we also had to mark a path across the garden. We marked all the necessary spaces with the thread, and when that was done it was time for the final touch before planting. Judy Speer brought out colored labels to organize the designated planting sections. As a team we worked to do all the labeling quickly – there were going to be a good amount of plants!

At lunchtime, we left for nearby Peterson Park while Jack and Judy decided to stay to put some finishing touches to the garden. When we came back to the garden the kids had arrived and were ready to resume on the garden. Each intern got two kids to plant with. I saw it as an opportunity to bond with these kids and a way to become a better teacher. 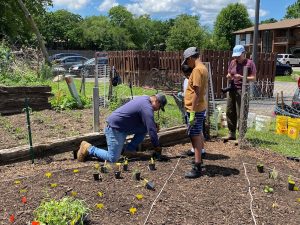 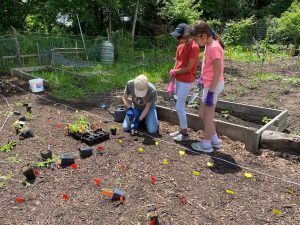 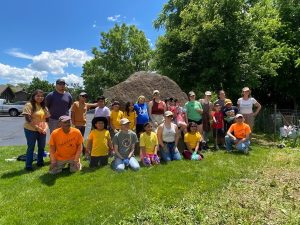 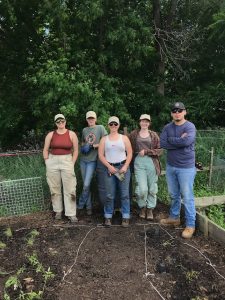 We planted for a good three hours. It was a bit difficult because near the end it became a little cramped and my legs were giving up from being kneeled down. On the other hand it was a great experience to be with the kids again, because they were so funny and happy, which made me glad to work with them again. In the end, the garden was beautiful and full of green, the ultimate gratification for the hard work we and all the kids put in. I really appreciate their work and thank them for really making our days much less stressful and much more fun.

On Friday, I wasn’t at work, but Bree, Amelia and Casper made herbicide solution and sprayed at 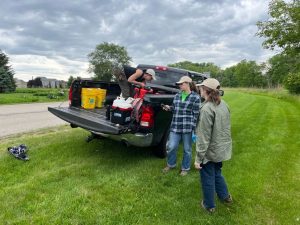 McAndrews Glen. They sprayed reed canary grass and giant ragweed. Once at Boloria, they had to work fast in order to beat the rain – herbicide must be applied three hours before rainfall to ensure its success. It started to drizzle toward the end of the herbicide treatment process, so it was time for a lunch break. We hope that all the hard work won’t go to waste and the team was able to make a dent on removing the reed canary grass in the area. We finished the week by planting more native plants, including a lot of ferns, at Hennen. We used shovels and augers to dig the holes for the plants and were accompanied by many mosquitoes.