Sawing logs and seeing bison: A roundup of CLIP week 10

Monday always brings the start of a busy week in the CLIP program, and this week was no different! We started off again with Megan, TLC’s ecologist, on a lesson diving deeper into chainsawing. We took another crack at taking the whole chainsaw apart and putting it back together. Once everyone got the feel for it, we headed off for the pines at Hennen Conservation Area, the perfect spot to start cutting. First, though, we had to start the chainsaws. We each took turns, putting a foot through the back to stabilize it and using our right arm to pull it across our chest. After that, we moved on to practicing on a log, each of us taking a slice out of it to make “cookies”. However, the log was stuck a little too far into the ground, so we couldn’t get through right away. Rolling it over quickly fixed that problem and we were able to cut the log, gifting us our fine treats. I have to say, though, mine was a little too woody for my taste.

Tuesday began with Zoom chats with four different women in the field of science, Briana Whitaker, Dana Carpenter, Natalie Christian, and Stephanie Campos. Each of them shared their varying experiences in college and throughout their careers in science and ecology. In the afternoon we went seed collecting as pale purple coneflowers, aka echinacea pallida, are starting to seed.

On Wednesday we worked on geographic information systems (GIS). None of us are particularly keen on programming, but we worked on figuring out the layers and moving them over to the Collector app which we use to mark down invasives and areas that are good for seed collecting. There we marked all the places we visited during our time as the CLIPsters. After lunch we headed out to Apple Creek to put in signs defining the boundary of our easement.

Thursdays are work days with the volunteers and this one brought us to Crowley Oaks. Megan was the only sawyer there, a hefty job and on a hot day as well, which meant that the usual three hours were cut down to two and a half. Luckily, that gave us plenty of time to practise cutting down a tree. After a demonstration on a rotted chunk, each of us got a turn taking a face cut which helps give the sawyer stability and designates a clear direction for the tree to fall. Then we cut from the back until there was an inch or two between the back cut and the face and pushed the rest over if it was needed.

Of course, Friday was the most exciting day, but not because of the weekend being so close. We took a trip to the Nachusa Grasslands! There we met with Anna Scheidal and her crew to collect pale purple coneflower seed in the expansive amount of land that they’ve acquired throughout the years. After lunch we took a tour of their seed barn and got to see a hammer mill, a machine that separates the seed from the pod, in action. Next were the bison, the stars of the show. Seeing them in their natural habitat was incredible. They’re in rut season which means that they were especially noisy that day. There was an instance where two got into a head-butting competition and we even got to see them do some wallowing, which is where they flop over and roll around in the dirt, pushing up plants to reveal the ground beneath. After that we helped collect more seed – sideoats grama and great plain flat sedge, then headed back to Hennen. 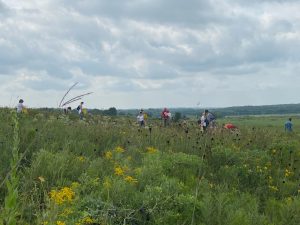 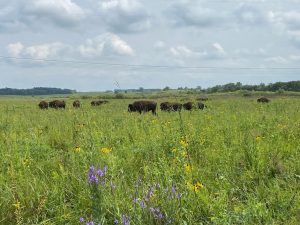 The bison at Nachusa 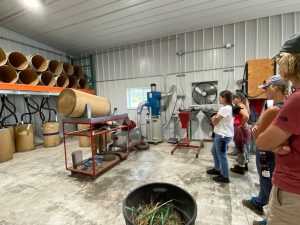 This week was one learning experience after another, and we couldn’t be more grateful for everyone who took part in it.