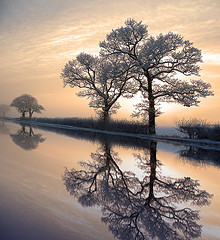 Have I mentioned “The Big Three”?

These are the three things – in some combination – that all life needs to survive: air, water and food.

Humans live just a couple of minutes without oxygen (which is found in the air around us), we survive just a few days without water, and just a few weeks without food. Thus, the term “The Big Three.”

Everything else, as much as we might like it or crave it or desire it, are things we do not physically need.

Yet, in America (and elsewhere) people, businesses and the goverenment often put those other things ahead of The Big Three.

Take hydraulic fracturing (fracking) as an example. States have been granting permits to mining companies to install thousands upon thousands of wells that cover landscapes in a strange grid of access roads and rectangular pads for the well and mining equipment. 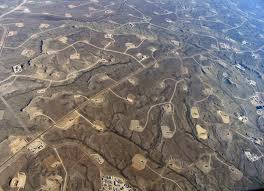 It is like some demented subdivision with no residents.

The mining takes place thousands of feet below the surface in a rock formation made up of shale, which is a sedimnetary rock that was formed when layers of clay particles were subjected to compaction over millenia deep within the Earth.

These shale layers do not occur uniformly beneath the Earth – just as mountains are in some areas and not others. Also, the type of shale is not identical from place to place. In some places, the shale formation contains natural gas trapped in the fine cracks that occur naturally in the shale. Fracking, then is a process whereby liquids are injected into the shale formation to enlarge the cracks and release the natural gas.

(Note: In other places, the shale might contain oil, as in the Green River Formation in Utah & Wyoming. Unlike natural gas, which is, well gaseous, the petroleum in oil shale formations is not so easily extracted, as it is essentially part of the rock, not just trapped in the cracks of the rock.)

There are two ways that fracking is in conflict with The Big Three, specifically with #2, Water.

Fracking has been shown to pollute groundwater aquifers that people use for their household water. The YouTube videos of people lighting the water coming out of their kitchen faucets are not just publicity stunts. In many cases, they are actually the result of dramatically increased amounts of methane getting into individual’s wells after fracking wells were installed in their communities. It is not a big leap to think that the fracking process led to the contamination of the aquifers. According to the mining industry itself, 5% of fracking wells have cracked well casings as soon as they are made. (The casing is the lining that is supposed to prevent leakage – into and out of the well.) So, if 1,000 fracking wells are drilled, 50 of those start out with a leaky well casing.

For purely selfish reasons – our lives – perhaps we should keep our priorities straight. Always put The Big Three first.