The Buzz about Honey Bees 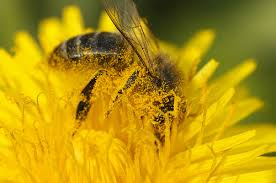 Did you know that nearly one-third of the produce (fruits, nuts, vegetables) consumed in the US is pollinated by honeybees? And without honeybees, those items would not be available – at least not in the quantities they are today.

Pollination is the process by which plants reproduce. Pollen produced by the “male” part of a plant (called the stamen) is transferred to the “female” part of the plant (the carpel). The next generation of the plant grows from the fruit or seed that results from the union.

The use of bees for crop pollination is big business. At any given moment, truckloads of bee hives are crisscrossing the country to provide pollination services for a flowering crop. Seriously, there are semi-trucks full of bees driving on an Interstate highway right now somewhere in America.

For example, in February and March, 1.4 million colonies of bees arrive in California’s Central Valley to pollinate almonds in an area the size of Rhode Island. Each colony has about 30,000 bees, so that means about 50 billion bees are buzzing around that area each year – for two weeks. After the almonds are pollinated, the bees are rounded up and taken to the next blooming crop.

March might find them in Florida’s citrus groves, then on to New York for apple pollination in April and May before they head up to Maine to pollinate the blueberry crop in June. A “migratory bee colony” may rack up 11,000 miles in a year. 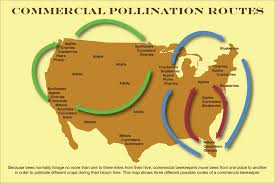 All that travel takes its toll on the honeybees. For instance, pests and disease spread between the colonies and across the country more readily.

It is believed that this movement contributes to a problem called “Colony Collapse Disorder” that has decimated honeybees. Entomologists, insect experts, have found that bees from CCD hives are infected with a large number of known bee pathogens. It is as if their immune systems have failed – much like AIDS in humans.

Two other stressors for bees are loss of diverse foraging habitat and the chemicals found in pesticides and herbicides.

Just like people, bees are healthier if their food comes from a variety of sources. Imagine eating only almonds for a month, then switching to oranges, then apples, then blueberries – each item being your sole source of nutrition for a month. That is similar to the travelling bee colonies’ diets because they travel from one monoculture landscape to the next.

In the case of chemicals, the problems are much more complex. In some cases, both the active ingredients and the adjuvants (substances added to make the chemical work more effectively) have been found to affect bees.

One might wonder why farmers don’t have their own bee colonies. Quite simply, an almond farmer in California or blueberry farmer in Maine does not have a year-round food supply to support resident honeybees. If the bees remained after the crop was pollinated, most of them would starve.