The Illinois Prairie: A Roundup of CLIP Week 7

With more than half of the summer already gone, our time with CLIP has been flying by. Even though we had a reduced crew of just two interns, week 7 brought new friends and new experiences, and the program’s first big field trip! 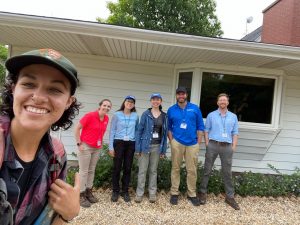 We kicked the week off with a trip to Bluestem Ecological Services in Marengo, a company devoted to helping people restore their land through native plantings, sustainable projects and continued stewardship. Even though the Bluestem bison were not interested in our apples, we got to see how their grazing helps to restore the land: Bluestem Ecological has roughly 25 acres of their 100 acre nursery in prairie, which helps to attract pollinators for the trees while also providing a biodiverse habitat for native wildlife. After a presentation, tour and lunch, we said our goodbyes to Sarah, David, and Eric, and made our way to the Westwood preserve in Woodstock for an afternoon of pulling parsnip. 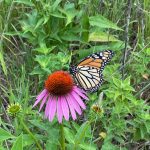 Tuesday morning may have been dreary, but the clouds were the backdrop for a seed-collection extravaganza. At the Spring Hollow Easement, shooting star, solomon’s seal, and red baneberry were all ready to harvest – in total, we hauled out more than five gallons of seed! After returning our treasure to the hoard at Hennen, we rendezvoused with David to do invasive work at the Prairie Ridge site. The clouds parted, and we marched into battle against our old enemies: parsnip and teasel. It got hot, but the work was worth it: next time you drive by the northeast corner of Route 14 and Dean Street, pause to admire the droopy teasel and the parsnip-free vista! 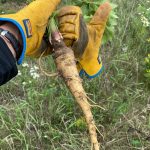 Early Wednesday morning, Kim, Lisa and the interns set off on CLIP’s greatest adventure yet: the trip to Midewin National Tallgrass Prairie. Like the settlers of old, we trundled down the preserve’s rutted, bumpy and flooded gravel roads – there was even a minor waterfall on part of the trail – testing the limits of Kim’s fearless Mazda field-mobile. Our destination: Midewin’s dolomite prairie, a unique ecosystem formed thousands of years ago when a glacial flood scraped the topsoil off of the earth, leaving behind exposed bedrock and an absolutely incredible habitat. Out in the field, botanist Michelle Pearion introduced us to transecting, a scientific way of tabulating which plants are growing where. We got to seriously brush up our plant ID skills, and we were able to take charge with the data collection tablet. After posing for a film crew with Openlands, we got to explore the prairie, spotting cacti, asters, a living carpet of pussytoes, and even a federally endangered species! 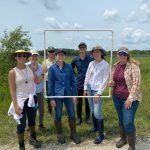 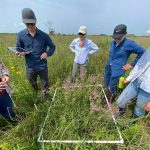 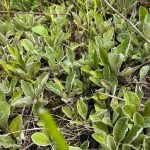 On Thursday we participated in the weekly brushing workday – one of our favorite recurring jobs. It’s always great working and connecting with the volunteers, and we always appreciate the abundance of kindness and snacks! This week’s workday was at Tryon Creek, a site we have been to a couple of times before. It’s been incredibly rewarding to get to see the progress that’s been made since our first visit – good riddance oriental bittersweet! We spent the afternoon at Hennen, adding Timothy grass to our plant ID binders, writing thank-you cards, and working on digital mapping with Kim (resident GIS expert extraordinaire).

Friday was a day of invasive work, and after giving office cat Spock a goodbye pet, we set out to tackle the teasel at the Wonder Lake Sedge Meadow. David, Kim and the interns took turns herbiciding and beheading the pernicious weed; teasel is a biennial, which means if you can kill flowering plants before they seed, the whole population can be eradicated within a few seasons. Unfortunately, as a prolific seeder, teasel remains hard to stomp out -even one missed seed head can blow the entire operation. After the weeds had been thoroughly blasted with herbicide, we had some time left to collect some good seeds – fox and porcupine sedges.

Despite being a little lonely without some of our interns, we had another amazing week, and I can’t wait to see what the next one has in store!