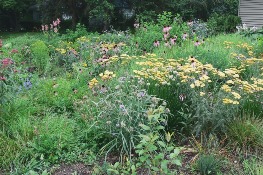 My friend Ken Williams, a horticulturist at Ringers Landscape Service in Fox River Grove, wrote a great blog post about TLC’s 25th Anniversary Brunch last month. I think it captures the spirit of the event and the essence of TLC.

Of the January 31st event, Ken observed: “A room full of local folks who see the wounds [in the natural world] and strive to heal them. A room full of people who don’t just walk the walk, but live the life.” Sounds like TLC’s members to me. Keep reading for the full article. Thanks Ken!

“I recently had the privilege of attending the 25th anniversary celebration of The Land Conservancy of McHenry County (TLC). This non-governmental-organization works to protect and preserve over 2000 acres in McHenry County, sometimes land they own, often land held in “conservation easements.” When landowners put part of their property in a conservation easement they retain ownership of it, but in exchange for a tax break they agree that the land will never be developed. Ideally, they strive to restore it to something similar to a pre-settlement condition. TLC facilitates this with an army of volunteers who participate in organized work days. There are other similar organizations in the area — Barrington Area Conservation Trust, Citizens for Conservation, Conserve Lake County, etc.

“The anniversary event had a record turnout, with over 250 people in attendance. The program consisted of a series of talks by various people who have been important contributors to TLC over the years. The final speaker was Ed Collins, Director of Land Preservation and Natural Resources for the McHenry County Conservation District. Ed is a nationally recognized voice in the ecological restoration community, and one of the most poetic speakers you will ever hear. There is nothing like an Ed Collins talk.

“Ed was one of the people who originated the idea of a non-governmental land conservancy for McHenry County, and he talked about those early conceptual meetings. He also talked about Aldo Leopold — the father of the modern ecological movement. With the publication of A Sand County Almanac (If you’ve never…Read it!) in 1949, Leopold introduced our culture to the need for a “land ethic.” He wrote, ‘…a land ethic changes the role of Homo sapiens from conqueror of the land-community to plain member and citizen of it. It implies respect for his fellow members and respect for the community as such.’

“Ed reflected on the fact that Leopold lived in a time of such limited environmental awareness that, for example, uninformed farming practices on the Great Plains helped create a series of dust storms known as the Dust Bowl. One single storm deposited 12 million pounds of dust on Chicago. Storms made it as far as the east coast. Leopold wrote that “One of the penalties of an environmental awareness is that one lives alone in a world full of wounds.” He saw little reason to believe things would improve. But here he was mistaken.

“Today we live in a world with opportunities for much higher environmental awareness than in Leopold’s time. Ed spoke of Leopold’s time as part of The Long Forgetting — a time when humans, who once understood that they are intimately related to the natural world, forgot that connection. Today we are participating in the Great Remembering — a time when a land ethic can be incorporated into every land use decision. This banquet I attended was a celebration of the Great Remembering. A room full of local folks who see the wounds and strive to heal them. A room full of people who don’t just walk the walk, but live the life.

“Then, as a landscaper, I had to acknowledge that almost all of the conventional practices utilized in my industry are deeply rooted in The Long Forgetting. Manicured lawns, poodle-cut oriental shrubs, lollypop trees. If you understand what you are looking at, they are nothing but a barren wasteland.

“So I ask you dear reader, to bring your property into the Great Remembering. How? Let’s start with your lawn. Turf is a superb surface for light walking, pet and people playing, and overflow parking. Where you don’t need those activities, replace it with something like this…

“It builds soil. It supports pollinators. It’s easy to maintain. It never requires the use of toxic chemicals. It’s always different. It’s fun!!! My neighbors come by and say, “Thank you. It’s like a painting that gets more beautiful every day.” And they bring us delicious covered dishes. Gerould Wilhelm speaks of soil as the “shining interface between the heavens and the earth.” Illinois’ famous deep rich soils were built by the root systems of native prairie plants. Turfgrass is almost as bad for soil as concrete is. Turfgrass robs soil of the ability to do its essential task of replenishing our aquifers — a fairly important task, if you like having your water tap work.

“Native shrubs and trees provide food for native caterpillars, which our songbirds are completely dependent on to feed their young. The oriental shrubs that dominate today’s conventional suburban landscapes will not support any native caterpillar, starving the baby birds. Fall produced native fruits and seeds are high in fat, providing songbirds with extra energy for either migration or overwintering. Fall produced oriental fruits and seeds are high in sugar, and leave the birds that eat them malnourished. If you allow barberry, burning bush, privet, honeysuckle, Japanese yew, cotoneaster or buckthorn to exist on your property, you are actively participating in the extermination of our native songbirds. Someday, dear reader, your grandchildren will learn this in school. The Great Remembering will not be stopped. Let’s get out ahead of this.”