The Nature of Natural Selection 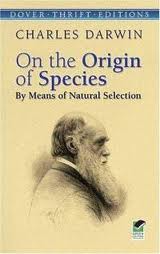 In my last post – the one with the poem about cardinals – I revealed that while cardinals mate for life, they are not necessarily faithful to their mates. Studies have shown that 9-35% of cardinal hatchlings are not genetically related to the fathers who raise them.

While this fact may spoil some of the romance, it is actually a very practical matter for the cardinals. By breeding with multiple male cardinals, the females help ensure greater genetic diversity of their offspring. In Nature, greater genetic diversity means there is a greater likelihood that some of the off-spring will have the right stuff to survive in an ever-changing world.

In the scientific community, this is known as Natural Selection, a phrase coined by Charles Darwin. Natural Selection is the process where, over time, biological traits become more or less common in a given species of plant or animal.

To help illustrate the concept, consider the story of the peppered moth in the United Kingdom. These moths occur in both dark and light color versions. The coloring helps the moths to blend in to the bark of trees, which in turn hides them from predators.

During the industrial revolution over a century ago, scientists observed that the number of dark-colored moths increased dramatically. This was due to the fact that as more trees became covered in dark soot, the dark moths were better camouflaged than their lighter cousins. Therefore, more dark moths survived to breed and produce more dark moths!

Fifty years after the first dark moth was found in Manchester, England, there was nary a light-colored moth to be found. However, after enacting clean air regulations in the 1950s, the balance reversed. Today, the light moths are much more common than the dark ones.

In Nature, the ability to adapt is critical to survival, and the primary way for a plant or animal to adapt is through passing on relatively beneficial biological traits to the next generation.

The same rule does not hold for humans, as we have other ways of adapting to change. For instance, as ocean levels rise due to melting polar ice caps, many human populations will adapt by building homes on stilts, building taller levees and moving to higher ground. Plant and animal populations do not have the same ability to alter their environment to keep it habitable. Instead, those individuals who happen to have what is needed to survive in the face of change will survive to pass along their genetic material, and over time, the species will adapt – or go extinct.

So, for the cardinals, male and female, the sexual infidelities are actually very practical – a way of hedging their bets and ensuring that the species will have a better chance of survival, regardless of what the future holds.