There are Fungus Among Us!

This is a blusher mushroom found June 24, 2010 in some woods north of Harvard. I’d never seen one of these in person — only in photos.

It’s a type of Amanita, which are usually poisonous, but this a non-deadly variety! While many mushrooms are quite safe (and good) to eat, there are quite a few that are either deadly poisonous resulting in near instant death, mildly toxic (causing gastric distress), and/or containing slow-acting toxins that may take several days to affect your vital organs and kill you.

So, it’s never a good idea to eat a found mushroom unless you are absolutely sure you know what it is. But, just touching a poisonous mushroom won’t kill anyone, so collecting them for identification is quite safe.

I was able to identify the blusher by looking at a combination of characteristics: cap color, presence of a “veil,” stem size, shape & color, gill color, spore color and the location where the mushroom was found (in this case, on the ground in some oak woods). In this case, white spores and flesh bruising red were two of the keys. Another key was that the blusher is commonly found in oak woods.

If you look closely at the photo with the cut stem pieces turning red, you can see white spore prints on the piece of paper. Spore color is one of the key pieces of information needed to identify a mushroom, so I always try to get a spore print by separating the cap from the stem and placing it on a piece of white paper under a glass overnight. This increases the humidity around the mushroom which helps to release the spores. 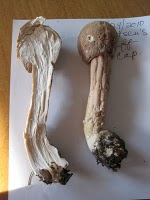 Something else I learned about Amanitas today: there is a mold that attacks them and turns them into gnarly, solid things, as seen in the picture to the left. I cut the mushroom thing in half lengthwise, and was surprised to find that the stem and cap flesh seemed to be fused, and while there was a cap-like piece at the top of the mushroom, but there were no gills, and the exterior was covered in a hard crust.

I would never have guessed that there was a mold that attacked fungi! That’s one of the things that keeps me interested in identifying mushrooms – there is always a new variety that I have never seen before, either because I’m in a different type of habitat, or its a different time of year.