Weather and a Changing Climate 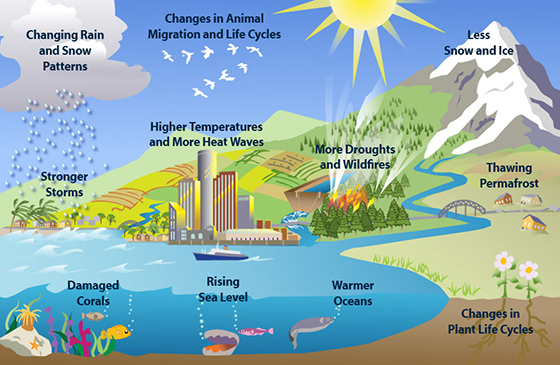 Interesting weather this winter, wasn’t it? Last December brought tornadoes to the south and a blizzard to west Texas. Locally, we set some near-records for daily high temperatures in late December and again in January and February.

Coming on the heels of the Paris Climate Change conference – which resulted in an agreement for nearly every nation in the world to reduce the emission of greenhouse gases like carbon dioxide through energy efficiency, reforestation, transition to renewable energy sources, and many other means – my first instinct was to attribute the extreme weather to climate change.

Before continuing, let’s quickly review weather and climate. Weather is what happens outside on a daily – or even hourly – basis. Climate is the average of weather events over time. For example, January in McHenry County tends to be snowy and cold (climate), but that doesn’t mean it will be snowy and cold every day (weather).

The National Oceanic and Atmospheric Administration refers to this as an El Niño year. NOAA is a scientific agency within the US Department of Commerce known as an international leader on scientific and environmental matters.
El Niño is characterized by unusually warm water in the Pacific Ocean near the equator. This phenomenon occurs every 3-7 years. El Niño affects weather patterns, ocean conditions and marine fisheries across most of the Earth for up to two years.

Complex forces related to deep ocean currents and global wind patterns cause El Niño, which is why it comes and goes on a somewhat regular basis.

However, El Niño is not the only global phenomenon at work – climate change is a factor as well.

Think about that for a minute. In 2014, prior to El Niño, average ocean temperatures in the equatorial Pacific Ocean were already warmer than average.

Is it any wonder climate scientists predict the 2015-2016 El Niño will be one of the strongest on record?

Which brings us back to climate and weather.

In 2015, the summer weather was unusually cool in McHenry County. However, if we look at the United States as a whole, the vast majority of the country had weather that was warmer than usual last summer.

Remember, the average global temperature in 2015 was the warmest on record, breaking the previous record set in 2014. The six warmest years on record – globally – occurred since 2005. The 11 warmest years occurred since 1998.
One or two years here and there that are much warmer than average can be attributed to phenomena like El Niño or volcano eruptions. However, when the trends have clearly changed – some areas have less rain than average for many years in a row (Australia, California) and others have much more rain (Eastern United States) – then it becomes scientific reality that the climate has changed.