What can I do to make it better?

One family’s story of preserving 40 acres of oaks in McHenry County. 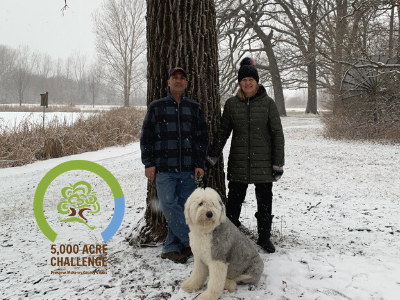 TLC recently launched the 5,000 Acre Challenge to increase the amount of oak woods protected in McHenry County. This is the story of one family’s work to protect their oaks.

Mike and Melody DiGrazia raised their family of seven in a large home in a subdivision in Crystal Lake. When their children were grown, they decided to downsize the house and upsize the amount of property they owned, so they purchased a 65-acre property in Union, IL in 2016.

The parcel includes 40 acres of oak trees that Mike has chosen to care for because of their beauty and their age. As a landowner and caretaker of the property, he feels obligated to do everything he can to preserve and improve the health of its native trees.

While the previous owners loved their land, (a sizeable medicinal garden remains on the property) they decided to sell it due to medical issues. Mike says, “After we purchased the property, I found an architect’s drawing subdividing the oak forest into seven separate parcels consisting of three acres each and about 10 acres for water retention. It occurred to me that perhaps Melody and I saved the land from being mostly cut down. I am sure the previous owners didn’t want this by choice, but perhaps financial matters caused it.” When Mike found out the previous owner had passed away, that inspired him even more to preserve the land in her honor.

On one of their first walks through the woods, Mike and Melody stumbled upon a huge oak tree, most likely the largest oak on the property. Quickly, they realized that the large bur oak was dead. At that point, Mike decided to do what he could to prevent more oaks from dying. 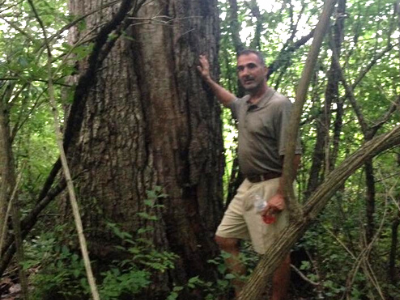 Mike with the large bur oak on his property that didn’t survive.

They invited a forester from the Illinois Department of Natural Resources to walk the property and provide them with guidance. He recommended organizations that could provide support, and TLC was among them.

Mike is the primary caretaker of the property, but from time to time calls on his children, other family and friends to lend a helping hand in caring for the oaks. As expected, the most challenging aspect of maintaining this 65-acre parcel is the physical work required in cutting and removing invasive species, especially with the limitations of a fairly recent back surgery.

However, the reward is in uncovering a young oak or hickory that is buried amongst the invasive species and watching it flourish the following spring.

Mike advises his fellow oak landowners to set realistic goals and strive for small victories. He acknowledges that it is easy to feel overwhelmed and like you’re losing ground instead of making progress.

He also highly recommends becoming involved with groups like TLC. Mike says, “I have gained significant support and have learned so much from groups like yours. I’ve met so many other interested people, all willing to help if they can.” The DiGrazia property is [email protected] certified, which recognizes and supports landowners who want to adopt environmentally friendly practices on their property.

While caring for the land has been a lot of hard work, (as Mike’s dad used to say, “Son, I am not aware of anyone dying from hard work,”) the rewards have been much greater.

For more information on the 5,000 Acre Challenge and how you can get involved, go to 5000Acres.com.