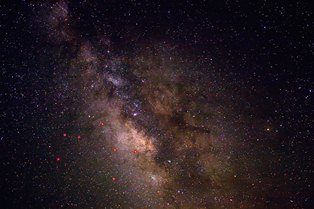 While driving late one night between Woodstock and Harvard, it struck me how dark it seemed. Most house lights were out, so the landscape visible along Route 14 was dark. It was a new moon, so there was no moonlight from the sky to illuminate the ground. I thought to myself: the world must have looked like this for the early settlers.

There are still a few places in the United States where true darkness can be found, but these dark spots are increasingly rare. According to information found at www.cleardarksky.com, there are no places in the entire state of Illinois that have no light pollution. In fact, east of the Mississippi River, a person would have to travel some distance into the Atlantic Ocean to reach a place with zero light pollution.

Woodstock is right on the fringe of a light bubble that surrounds the City of Chicago and most of the suburbs. This light bubble stretches from University Park in the south to Deer Park in the north, and from Lake Michigan in the east to the Fox River in the west. In this area (a place where it never actually gets dark), the sky is perpetually grey or brighter, and only the brightest stars are visible to the naked eye. In technical terms, this bright zone is considered Class 9, Inner-city sky.

Woodstock is in an area considered Class 6 or 7, Urban/Suburban sky. The Milky Way may be visible if directly overhead, and the horizon glows with a faint light that obscures all but the brightest stars.

Heading northwest from Woodstock, the sky is rated a Class 5, Suburban Sky. In this area, the milkway is visible when overhead, but is washed out. Clouds appear brighter than the sky behind them.

In a truly dark, Class 1 or 2 sky, clouds will appear as “black holes” that appear deeper than the starlit sky around them. This is because there is not ground light pollution to illuminate them from below.

Now, there are those who will ask: “so what?”

The sky is part of humanity’s cultural inheritance: a door to the Universe, part of the rural environment, and a social amenity. Light pollution reduces the celestial spectacle to a pale imitation – a few pin-pricks of light from the planets and brightest stars – and robs us of a source of inspiration which until recently could be taken for granted.