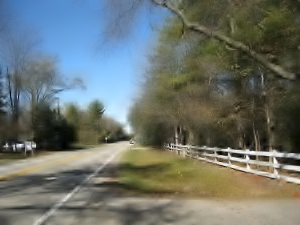 If you’ve driven on Fleming Road, you have probably thought “This is pretty” or words to that effect. But why do people react that way to some drives and not others?

The hills. The trees. The curves in the road. Trees close to the road. Trees overhanging the road way — a canopy effect. It all contributes to a scenic driving experience.

A “peaceful and comforting ride” is how one friend describes her trip down Fleming. Another told me that when she is all stressed out, as soon as she turns onto Fleming, the stress melts away – it has that effect on her.

But there is a plan afoot to “improve” the road — to make it safer — by enlarging the shoulders to at least 4 feet, and by cutting some of the hills down. The work would also include a change in how water runoff is handled.

Currently, runoff goes wherever it can since there are not consistent swales along both sides of the road. That may sound bad, but actually, it seems to work okay. The runoff flows into the existing low spots along the roadsides and slowly infiltrates into the ground, or is absorbed by plant roots. Modern engineering “standards” say that proper road design means that one must build either large swales or curbs and absorption wells to handle the runoff.

And all that engineering comes at a price – it means widening the road way by nearly 30 feet, from the existing 22 feet of pavement, to at least 30 feet of pavement and up to another 28 feet of ditches. I’m sorry, but how is that an improvement? An improvement in what way?

Isn’t it possible that the road way is okay the way it is? That it may not be perfect for everyone, but that in the grand scheme of things, it is a pretty darn good road, and any effort to bring it up to current engineering standards will not only reduce its beauty, but maybe even make it a more dangerous route for drivers?

Consider that the character of the roadway causes drivers to slow down – they slow down because the roadway is narrow, there are trees near the road, 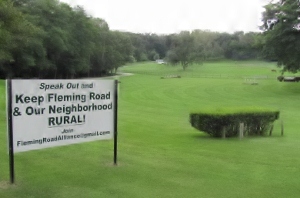 the curves and hills mean one cannot see much of the road ahead.

Based on historic accident records, it appears that the current configuration of the road (with vegetation close to the pavement, hills that make it hard to see what’s ahead, and lots of curves) is at least part of why accident rates are low.

Between 2005-2009 there were 38 accidents on Fleming Road. 32% (12) were collisions with deer; nearly all (87%+) of the accidents took place at one of the three intersections (Bull Valley Road, Country Club Road or Route 120). Drivers involved in the accidents were most likely to say that they didn’t see the stop sign. 79% of the accidents were when the pavement was dry, and over half occurred during the day. There were no fatalities, one serious injury and six minor injuries.

The highway engineers who are studying Fleming Road right now say that there is only one spot along the road where visibility is a problem for people entering the road, and that is at Hidden Lane looking south. The solution, they said, would be to move a utility pole and trim some bushes. What that tells me is that the curves aren’t causing a problem from a road design standpoint, neither is the vegetation close to the road.

So, maybe the buckthorn needs to be trimmed back here and there, but that’s okay — for many reasons. Apply a little Garlon 4 to the cut limbs, and help take care of them permanently!