Why Does Wind Blow? 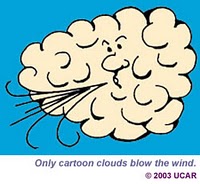 It’s a windy day today! The leaves in the trees are in constant motion, creating that wonderful rustling sound.

What is wind? We can’t see it. It doesn’t have a smell of its own or a color or substance. But, man is it powerful when it wants to be!

Technically, wind is caused by differences in air pressure – the greater the difference in pressure from one area to another, the stronger the wind. So, you might have heard the weather reporter talk about a “front” coming through — that is typically a high or low pressure system, and a front is inevitably accompanied by wind as the pressure changes from low to high or high to low.

I used to joke that wind came to Illinois from Kansas (because the area between here and there is so flat…) That isn’t technically accurate, but it is true that weather systems generally move from west to east, so by watching the weather in Kansas we might get a hint at what to expect here in a couple of days.

There is something called the Beaufort Scale that sorts wind into categories based on the speed. For instance, wind that is 1-2 miles per hour is called “light air.” One might see smoke move in the direction of the wind, but otherwise there isn’t much to make one aware of light air!

A little further up the scale, a “gentle breeze” is defined as 8-12 mph wind, which results in leaves and twigs being in constant motion. I’m guessing that today is probably a “gentle breeze” kind of day, although it might have gusts that would be considered a “strong breeze” (25-31 mph) which is strong enough to move large branches. Certainly we are getting gusts that would be considered a “fresh breeze” of 19-24 mph where small trees sway!

The top of the scale is 75+ mph, or hurricane force winds which cause severe and extensive damage. I suppose around here we might call those “tornado” force winds. Although, a tornado might only fall into the category of a “whole gale” or “strong gale” with winds of 55-63 mph and 47-54 mph respectively. That’s still a lot of force for something invisible!